There is definitely something to be said for travelling light. Leave the kitchen sink and chandelier at home, pack the essentials and hit the road.

Of course, nowhere is it written that travelling light means travelling uncomfortably, and all manner of caravans and campers are built to suit would-be vanners who don’t have the means to upgrade their tow vehicle. 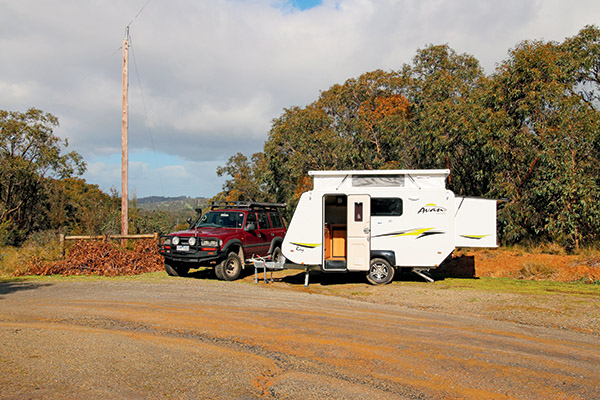 Avan is known for its ability to create living space seemingly out of nowhere. The classic Aliner – the original Avan – folds, origami-like, into position. In half a minute, it doubles in size. The Ray has a similar knack for growing quickly. Not up, mind you. But out. Intrigued? Read on…

Modern caravans, by and large, focus on convenience. Surely it is more convenient to open your slide-out at the push of a button, letting a 12V motor do the work? That argument might hold water for the larger types that contain an entire kitchen and bedroom, but the Ray’s slide-out – pint-sized by comparison – is a manual job. And in a van such as this, that is how it should be. Simplicity is the point.

To open the slide-out, just undo the catches on the rear ‘wall’ of the van. This wall lifts up on gas struts, providing access to a structure composing three walls and a roof. Just grab the handles and pull it backwards – the solid-walled bedroom slides smoothly out on metal runners. I was surprised, and pleased, by how effortlessly the system works.

But what about the bedroom floor? Well, that’s just as easy. Inside, a bed base with foam mattress rests vertically when travelling, but with the bedroom open, it’s just a matter of gently lowering it – the base more or less self-guides into position. Packing the slide-out away is just a matter of reversing this procedure.

Let’s face it: not everyone likes canvas, so the solid, insulated walls of the bedroom have a distinct appeal, and in the Ray, the system is particularly well integrated.

The other part of the setup procedure is the pop-top roof. No surprises here – undo four external clips and raise the roof from the inside.

In terms of external features, only the basics are covered. There are two 4.5kg gas cylinders on the drawbar (where you’ll also find a tap that could use a stoneguard), along with a standard ball coupling and offset jockey wheel. The gal-lined front boot is unencumbered so there’s room for lots of gear, and there’s a storage bin at the rear offside, too.

An awning isn’t included as standard fitment, and there aren’t the other external bells and whistles you’d find on a larger, more expensive rig. But I wasn’t overly disappointed – the Ray is about budget vanning, after all. Besides, some of those bells and whistles could be added later.

The van’s undercarriage comprises 4in main chassis rails sitting atop a 6in drawbar that runs back to the Al-Ko beam-axle leaf-spring suspension. It’s all fairly tidy, with plumbing and cabling tucked out of harm’s way, and the 95L water tank mounted behind the axle. This van isn’t an offroader (and nor does it pretend to be), and its underpinnings appear suited to the travelling for which it’s intended.

A couple of things struck me about the layout and general design of the Ray. One, the kitchen and dining areas are useable even with the slide-out closed, making roadside stops for lunch a breeze. And two, for a van with such a small footprint, it feels surprisingly spacious.

The front kitchen is equipped with a four-burner Swift 500 Series cooktop (with a large pots and pans drawer underneath), an optional Panasonic microwave, a small Thetford three-way fridge, and a sink with hot and cold water. Storage-wise, the Ray has a couple of kitchen drawers, though the space under the sink is occupied by the Shurflo water pump and associated plumbing, and two lockers above the sink. There’s a small pantry in the entryway, and a hatch in the benchtop gives access to yet more space.

Along the offside is a two-person lounge with storage beneath – just remove the cushion – while a decent wardrobe sits behind. I liked the wardrobe’s false bottom, which leads to a neat storage nook, though there’s a conventional locker door at floor level anyway.

Opposite the lounge is a cafe-style dinette which can convert to a bed. The nearside runner for the slide-out sits between the dinette and wall, but it’s unobtrusive and Avan provides a cushion that neatly covers it. The offside slide-out runner sits behind the wardrobe and lounge. Naturally, each dinette lounge offers storage spaces under their cushions but they are each partially taken up by the hot water heater and onboard battery.

And then, of course, there’s the bed. While it could do with a reading light or two, I liked the design and concept. Obviously, the partner sleeping against the rear wall will be at a disadvantage when it comes to late-night bathroom visits, but that’s the nature of this particular beast.

I don’t mind admitting to being rather taken by the Ray 402. It’s lightweight, tows well, and the simplicity of the slide-out bed should be applauded rather than criticised as ‘too basic’. The space-saving aspect of the slide-out is worth noting, too. Though it takes a minute to set up at camp, the Ray’s compact towing dimensions make it very manoeuvrable.

Yep, for two people, the Ray 402 works as an affordable, tempting prospect for blacktop touring.

The full test appears in Caravan World #556 October 2016. Subscribe today for the latest caravan reviews and news every month!