When offroad caravans first started to appear in greater numbers on the Australian market some years ago, quite a few manufacturers thought that by lifting a van, beefing up the chassis and fitting independent suspension that they had produced an ‘offroad’ caravan. That lasted as long as a few rough tracks, and not only produced a few better defined classifications, such as rough-road, but also encouraged manufacturers to think above the chassis.

Not that Bushtracker ever fell into this category. It has long been producing serious offroad vans, paying just as much attention to above the chassis as below. In this review I’ll be taking a close look at one of its 5.94m (19ft 6in – external body length) custom-built offroaders. A photo that Bushtracker likes to wave around features a substantial number of beefy blokes standing on one of its caravan frames. Yes, it is a PR photo, but it does demonstrate the strength in the frame, which is built from 25x25mm and 25x50mm box section aluminium.

Between the frames, cooler board insulation, 3in (75mm) for the roof and 2in (50mm) for the walls, is fitted all round. Structural rivets are used to fix the aluminium cladding to the frame. Fitted by the entry door is a smaller “stable door”, which is used for keeping water and dust out of the van when crossing creeks or deserts.

Below all of this, the hot-dipped galvanized chassis has 150x50mm (6in x 2in) double rails with the drawbar integrated into the chassis construction. Independent load sharing suspension is fitted to the tandem axles.

BUSINESS AT THE FRONT
The drawbar on our Bushtracker is a very busy place. On the pointy end is a Hitchmaster DO35 and a geared jockey wheel, which makes moving the van around easy.

A handy mesh rack also sits between the rails, while behind the mesh stone protector it looked a bit like a quartermaster’s store – three jerry can holders, two 9kg gas cylinders and two spare wheels. Having the spare wheels mounted at the front does add to the ball weight, though.

A notable characteristic of Bushtracker vans is the front profile, recessed to accommodate the wheels and gas cylinders. This also means no conventional front boot; rather, there’s an extra large front offside storage bin.

Another little feature on the drawbar is a suction line. This allows water to be pumped from sources that may not be 100 per cent suitable for drinking but are still okay for washing and showering. The water is pumped directly and does not enter the water tanks.

CUSTOM EXTRAS
Given its custom design, the van comes with a few goodies around the outside, namely a slide-out Waeco 40L fridge and slide-out barbecue, both at the front nearside. Further along the wall is an entertainment unit, complete with 240V powerpoints, 12V sockets and TV antenna connections.

Bushtracker vans are known to have their own look, and this one is no exception. Apart from the Tas oak finish, the custom layout has been built with offroad travel in mind. Waterproof ply is used for the out-of-sight cabinetry and marine grade catches are fitted to the doors.

BED AND BATH
The layout consists of a front bedroom, nearside kitchen, offside bathroom and a dinette/lounge that fits into the rear corner and partly across the back. By day the Seitz windows let in plenty of light and ventilation. At night time, the combination of fluorescent, halogen and LED fittings offers plenty of illumination, including in some of the overhead lockers. There are some RVs I’ve seen where the under-locker lighting makes it very difficult to see what’s in the lockers at night – not here!

A roof-mounted air-conditioner is fitted, but for those cool desert nights, an Eberspacher diesel is also on board. The queen-size bed at the front gets plenty of light and ventilation with windows all round and a large marine-style hatch above.

Wardrobes are fitted either side of the bed, as are cabinets and steps (the bed sits quite high). This allows for extra storage space – in this case three drawers and a washing machine.

Adjoining the bedroom, the bathroom is slightly larger than usual, with the standard items like variable-height flex-hose shower and Dometic vacu-flush toilet. It also has a moulded-in vanity cabinet that comes with a washbasin, cabinet and adjacent linen cupboard. Ventilation is handled by a fan and a small window.

A FULL KITCHEN
The kitchen bench is a very good size. In addition to the stainless steel sink avec drainer and Swift four-burner cooktop/grill/oven, it comes with plenty of cupboards, overhead lockers and drawers of various sizes. The 190L Waeco fridge is located on the opposite side, between the bathroom and dinette. An extra feature of the fridge is the simple locking mechanism that’s been added for rough conditions.

An asset of the dinette layout is that there is not only space for seating but also a bit more for stretching out (at least for one person) when watching the flatscreen TV mounted on the nearside corner cupboard. Windows on two sides give a good view of the surrounding countryside and there’s no shortage of storage – overhead lockers, under-seat areas and the corner cupboard. The lower drawer of the latter is large enough to contain a spare toilet cassette.

Electrics in this Bushtracker are quite sophisticated. Three 135W solar panels and/or a 40A battery charger keep the three AGM batteries up to charge. They in turn can supply the 12V load, including the 1800W sine wave inverter.

THE BOTTOM LINE
If serious offroad caravanning is what you desire, then there’s no doubt that a Bushtracker like this 5.94m (19ft 6in) custom will fit the bill.

It’s not a light van, given the 3500kg ATM, nor is it an inexpensive van. But it is well equipped (there’s not enough space to mention all the features) and built with plenty of experience and a purpose in mind. 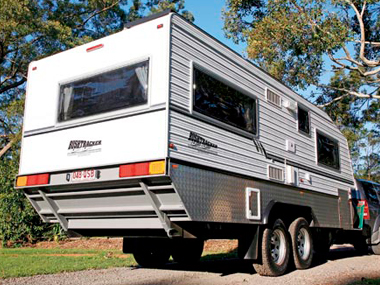