BUSHTRACKER CARAVANS ARE well known for their offroad abilities. For the most part, the company builds their rigs for travelling couples, but they occasionally get a request for a family van. In this case, that was a 6.4m (21ft) tandem axle unit.
The different layout really isn't a problem for this design crew, however, because just about all of their vans are custom-built anyway. It's more a matter of looking at the van from a different perspective, namely with a few more people living in it.

NEW FROM OLD
The design team's plan was to take one of their 'standard' layouts - front bedroom, nearside kitchen and offside dinette - and squeeze in a smaller bathroom behind the dinette, as well as two bunk beds. This might sound a little tight, but it works surprisingly well and has parents and children (or grandchildren) located at opposite ends of the van, minimising disturbances. These Bushtracker guys know what they're doing.
The term "offroad" gets thrown around the RV industry with a little too much abandon. So I asked Bushtracker's Matthew Kurvink exactly what makes a true offroad van.
"How long have you got?" he asked. "It's all kinds of things, really, starting with the way we build our chassis and the body structure, and ending with the components we choose. Not many people think about it, but individual components and appliances have to be just as tough as our vans.
"Testing is also vital. One of our directors, Tracy Brunes, spends a fair bit of time not only testing our vans, but any new equipment as well. Someone has to do it, don't they?"
I couldn't have agreed more and, after briefly daydreaming about a full-time life on the road testing vans, got down on my hands and knees to study the 6in laminated, double-railed structure of the hot-dipped galvanised chassis. As a matter of fact, the chassis doesn't really look galvanised, but that is mainly because most of the under-body is covered by a bitumen-based body deadener paint.
The Bushtracker rides on tandem axle load-sharing independent suspension. Instead of standard 12in caravan brakes, the wheels are fitted with two-piece hub drum commercial brakes, which also means large bearings can be used on the wheels. Also not to be missed under the chassis are the four 90L water tanks, which are designed to be split between potable and non-potable water.
The frame is all aluminium, rather than timber, and uses 25x25mm or 50x25mm box sections. The company uses a combination of double rivets and welding, and believes there is nothing better. And considering the same
system is used by Boeing and Airbus, who are we to argue?
One of the easily identifiable characteristics of Bushtracker vans is the shape of the aluminium-clad body, which features a lower waist of alloy checkerplate. In particular, the rear wall, which has a chamfered lower edge to give a good departure angle, and the front, which has a recessed space for two spare wheels and two 9kg gas cylinders, are eye-catchers.
This setup means there is no conventional front boot as such, but rather a very spacious tunnel. Bushtracker calls this a cargo area, which is very apt given it's large enough to climb into. And all of this room is fortunate because this is where the 1800W inverter, AGM batteries and charger are all fitted, and they would be hard to get to otherwise.
Around the outside, most of the company's standard features are on display, including entry/security door with watertight plate, and tinted Seitz windows. There are also a few extras, such as the awning, slide-out barbecue and entertainment unit including flatscreen TV.

ALL ABOARD
Inside, superb-looking cabinetry is everywhere. Light hued timber, large roof hatches and generous windows give a very spacious feel to what could otherwise be considered a cramped interior. Light fittings are generously appointed. I was interested to see these included some new second-generation LEDs, which are warm white rather than cold blue.
The considerable length of the nearside kitchen bench is of note - really what's needed with a family van such as this. A four-burner cooktop with grill and oven underneath, stainless steel sink with drainer, plus tank and filtered water supply, are built into the bench, and there is considerable benchtop space. There is no microwave, but there is a provision for an installation under the bench.
Storage consists of four drawers, three cupboards and five overhead lockers. There is also something that looks like a cupboard next to the entry door, but it is actually home to a front-loading washing machine, with a drawer above.
Fitting in between the dinette and bathroom is a (very) large 220L Waeco fridge. The fact it's a 12V compressor-driven unit might raise a few battery charge concerns, but the four roof-mounted 135kW solar panels should ease those worries.
The dinette is a lesson in what works in a caravan. It may look a little plain, but is eminently practical. I suspect four people would be very cosy, but the two younger members are going to have a nice footrest in the form of the wheel arch. Sockets for 240V AC and 12V DC are placed under the dinette windows, perfect for laptops and game consoles. Under-seat drawers and overhead lockers give plenty of storage and the adjoining window provides a great view of the outside world. 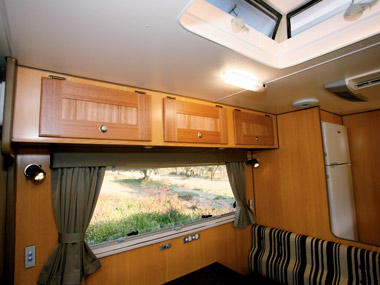 SEPARATE LIVING
In my younger years, there was nothing quite like having my own bed, and the Bushtracker bunks cater well for the younger ones. They even come with a curtain to close off the rest of the van, as well as windows in both walls to see what's happening outside. There are also reading lights, and the switch comes with a 12V socket.
The only disappointment is that there isn't a little compartment or shelf for stashing books, torches and secret stuff. Surrounding storage, however, is generous, with a full-height cupboard alongside the bunks, and under-bed drawers for the lower bunk. The cupboard has drawers and shelves fitted, and each shelf comes with an LED strip light, so no peering into dark corners is necessary.
The corner bathroom is another interesting study of space, with its cassette toilet, variable-height shower, washbasin and three storage cupboards. One could say it's a compact design, but quite workable as long as everyone doesn't decide to use the bathroom at once. It's vented by a ceiling fan hatch and window.
Up front, Mum and Dad's bed is set-up in something of a trademark Bushtracker style - slightly higher than usual to accommodate storage. It also has the usual side wardrobes and cabinets. Windows all-round, plus a big roof hatch, give plenty of fresh air and light.
THE BOTTOM LINE
With an ATM of 3500kg, this Bushtracker is no lightweight van, and as such will require a large tow vehicle. That said, our Land Rover tow vehicle didn't seem to have any problems moving along. That ATM also gives a good load capacity of over 500kg, a must for family travel.
If you were planning offroad travel in this rig, you could do so with a great deal of confidence.

Thanks to Kenilworth Homestead for providing the photoshoot location.