Kakadu National Park (NP) is huge. It embraces 20,000 sq km of diverse tropical landscapes: tidal flats and estuaries, monsoon rainforests, sandstone escarpments, savanna woodlands and riparian floodplains. While the park has a special charm when inundated by summer rains, it is most accessible in the dry season when the floods have subsided and dusty roads once again reach out to the park’s more remote attractions.

Heading south along the Kakadu Highway, with our Kimberley Karavan in tow, we turned off 48km south of Yellow Water on to the gravel access road to Maguk (aka Barramundi Gorge). This dry season, the only 4WD track ended 12km later at a carpark with picnic tables, near a bush camping area nestled in a shady valley that was still green though most of the surrounding country was desiccated and brown. 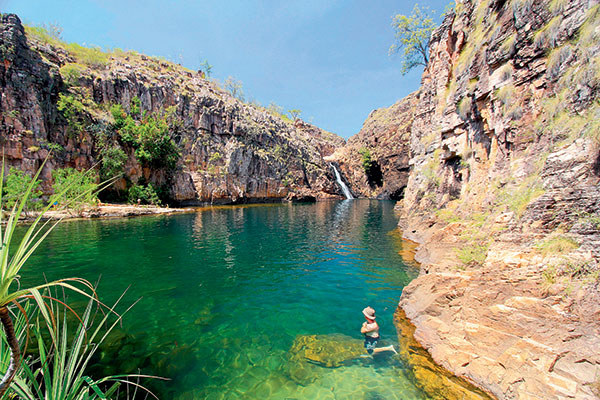 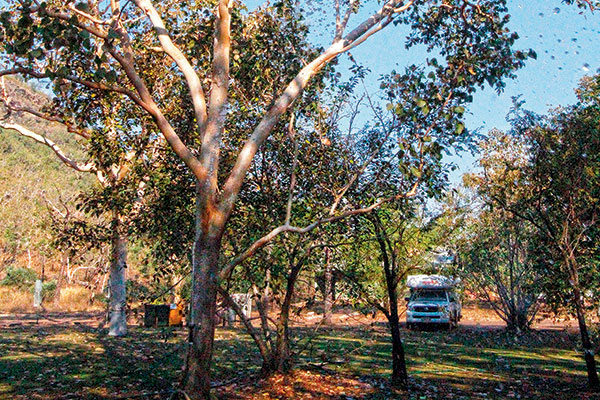 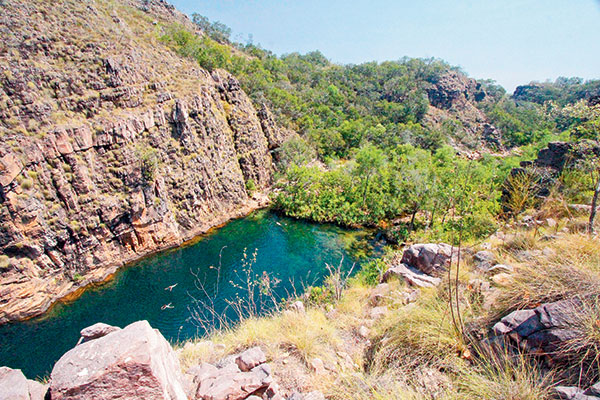 GOING FOR A WALK

From the carpark, we set off on a 2km walk into the gorge. At first, a boardwalk made an easy path through shady monsoon forest, adorned with birdsong and native tibouchina flowers. As the forest thinned out, the track became sandy as it approached a small bridge over a rocky creek that marked the second, more difficult part of the walk. From here, the trail switched back and forth across the creek over plates of sandstone that reflected the midday heat and we clambered over stepping-stones where the creek widened to enticing pools.

Gradually, the walls of the gorge could be seen above the bush in the distance and we pressed on until the path spilled on to a tiny beach framed in pandanus at the end of a long, emerald plunge pool. Sheer walls of pink sandstone flanked the pool on either side and narrowed to a perennial cascade at the far end.

A dozen trekkers were already here, frolicking in the limpid waters, sunbaking on the narrow rock ledges around the perimeter or taking a massage under the falls. But the trail didn’t end here and we continued along it through a steeply rising landscape of scattered boulders and ragged bush until we emerged on a cliff with a panoramic view over the gorge. Below us, a series of deep pools descended through a rocky defile to the waterfall at the end of the pool and, in this inhospitable terrain, bathers were refreshing themselves after a difficult climb.

After lunch at the campground, we returned to the highway and continued our southward journey, soon passing the entry to Gungurul. Although not the most scenic of camps in the area, this is the only bush campground in Kakadu accessible all year round by 2WD vehicles. A 4km return walk from the camp leads to a branch of the South Alligator River and up a moderate climb to a lookout over the South Alligator Valley.

Driving is not the only way to experience this ancient country. About 21km from the highway is a car park at Yurmikmik that provides access to a network of walks through diverse landscapes. We followed the Boulder Creek Walk on a 5km loop that began along Plum Tree Creek, just a sandy watercourse this late in the season, to Boulder Creek, lined with cool monsoon forest. In the wet season, this gully littered with enormous sandstone boulders echoes to the sound of waterfalls and rapids, but this day the only sounds were fan palms rattling in the wind and the chirp of unseen pardalotes in the bush.

Emerging from the gully, the track undulated through knee-high grass and open woodland to its junction with a path to Yurmikmik Lookout atop a stony ridge. Here, an expansive view embraced Bornluk (a large sandstone hill) to the north, more stunted ridges to the west, the lush vegetated ribbon of the South Alligator River corridor in the east and, to the south, the seasonally swampy uplands of the Marrawal Plateau. Other walks from Yurmikmik include Motor Car Falls (7.5km return) and Kurrundie Creek Walk (11km return).

Five kilometres beyond Yurmikmik, the road came to a T-intersection. Turning left here leads to Gunlom Falls and turning right (signposted to Gimbat Picnic Area) leads to a bush camp at Jarrangbarnmi (Koolpin Gorge), which is not your average tourist destination and is not easy to get to. You definitely need a high clearance 4WD, and a permit (with a key for the locked access gate) must be obtained in advance.

The number of visitors is restricted to 40 per night and access times are strictly regulated: departures have to be out of the gate by 4pm and arrivals can only drive in after that time. That way the very narrow access track works like a one-way road and you don’t have to worry about oncoming traffic. The camping area is a grassy clearing with fireplaces and a couple of pit toilets. The gorge is pure wilderness, accessed by walking over very rough terrain, wading or rock-hopping up the creek and a climb over huge pink rock slabs to pools fed by waterfalls.

The track continues for 7km beyond the Koolpin turn-off to end at Gimbat, a shady picnic area on the banks of the South Alligator River.

In 1953, a major uranium deposit was discovered at nearby Guratba (Coronation Hill) and, during the next decade, 13 mines operated in these headwaters of the South Alligator River. Gunlom was known as UDP Falls because it was the early campsite of the Uranium Development and Prospecting Company, accommodating about 150 people at the time of peak activity. It was abandoned in 1964 when uranium mining ceased due to a world oversupply of the mineral. During the 1980s proposals for further exploration in the area and a gold mine at Coronation Hill sparked a national debate, which ultimately led to the addition of this southern region to Kakadu NP in order to preserve its considerable cultural and environmental values.

Unsurprisingly, this aquatic oasis, the spacious campground and the park-like picnic area adjacent to the falls – all easily accessible by 2WDs – make Gunlom one of Kakadu’s most popular tourist destinations. If you find the beach too crowded (and you might in peak season), you can explore Gunlom’s open spaces by two walks out of the camping area.

The Murill Billabong Walk is an easy 2.5km stroll through monsoon forest to the billabong and beyond through open woodland to the South Alligator River, an excellent route for spotting birds and other wildlife. A more challenging walk is a steep 1km climb to rock pools at the top of the waterfall and a lookout with fantastic views over the campground and southern Kakadu.

The full feature appeared in Caravan World #559. Subscribe today for the latest caravan reviews and news every month!