Having lived on the road for 11 years, Syd and Maz Reilly have mastered remote travelling. Cape York, Gibb River Road, Cape Leveque, Simpson Desert – you name it, they’ve been there. Their easy-to-love personalities and faces are well-known in the ‘caravan world’ and it’s safe to say they’ve learnt more than a thing or two over the years...

Whenever you pull over after a long run, use your eyes to survey the van for anything amiss. Anderson plugs can be notorious for breaking and leaving live wires trailing, caravan legs can occasionally drop a little, gas taps can be left on – the list goes on. We once had a bike box on the back of our previous caravan drop down during a particularly rugged stretch in Davenport National Park NT, which we only discovered at a loo break! Another time we discovered a bag of mushrooms still resting on the drawer bar 50km on from our shopping trip!

Roll out the tarp and get under the van to do a thorough check, especially before, during and after long, corrugated roads and dusty trips. Check if the van has been resting on the Bump Stops and crack those wheel hubs to check the bearings, especially if you've been ploughing through water crossings. Resist the urge to reach for a ‘tinnie’ until you do the regular checks! 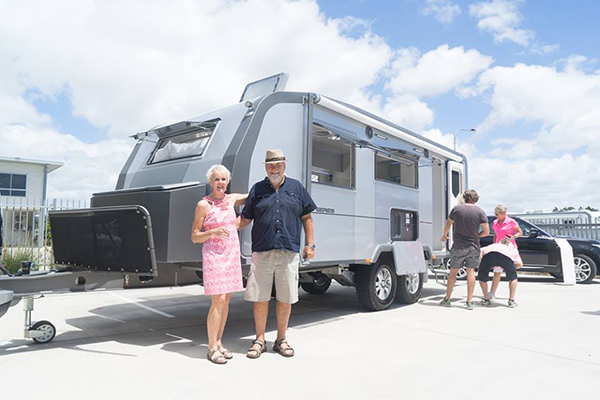 Don't ignore odd noises as you travel along, particularly when on long, corrugated and dust-bowl filled roads, like the Burke Developmental Rd in the Gulf Country, the iconic Gibb River Road or the alternative Savannah Way through to Borroloola and Hells Gate. You don't want to be leaping nervously at every little noise, but keep an ear out for changes in sound. It doesn't take much to pick up a stone in a tyre – what a heart-stopping, screeching racket it can make! When this happens we pull over, reverse a little way and the problem is usually solved. Early in our travels with our camper-trailer the 'odd noise' was the jockey wheel dragging along on the road. We didn't know it could do 100kph!

WA natives Jim and Peta Shaw are no strangers when it comes to executing a highly organised off-road operation, having covered thousands of kilometres during their years on (and off) the road. Here are their wise words of advice for remote travelling:

1.    Keep an eye on the weather, especially when heading off-road.  Dirt roads can become quite sticky with even a small shower of rain.

2.    Talk to other travellers you meet along the way. The best way to find out about current road conditions and remote locations is from fellow travellers or locals.

3.    While you could rely on there being a shop in every town you pass through, it’s best to be prepared and have a meal plan in place.  As a general rule, we have enough fresh food for about five days, but also a few emergency pantry meals such as bake beans and tin soup. Don't over shop - write a list and stick to it.

4.    Be smart with storage. Always store heavy items closest to floor level with lighter goods higher up. I separate glass jars in the pantry so they can't rub together (stubby coolers make good buffers). We’ll never forget the time we were travelling across the Central Highway from Laverton WA to Alice Springs NT, and the lid on a new mustard jar in the pantry (never opened) managed to come off and splatter everywhere! This is why I always zip lock anything with a lid.

5.    Always top up the tank at every opportunity, just in case. A fuel station shown on a map, doesn't always guarantee fuel will be available.

6.    Always carry plenty of water, drink lots of it and use it wisely. A 100L tank can last us four days.  Some of our tricks include smarter showering (turning the tap on and off throughout the wash), wiping down dishes with paper towels before washing all together. The number of tanks we fill, is determined by how far we are travelling.

7.    Tyre pressure is always a contentious issue and everyone has a different opinion.  A basic rule is: lower tyre pressure means lower speed, so always allow extra time when travelling off-road. Investing in a good quality tyre pressure monitoring system is handy and we wouldn't go off road without an air-compressor for tyre pressure adjustments.

8.    If you’re not using your gas, turn it off at the bottle, every time.  We've heard stories of people leaving their gas bottles open, and due to a faulty bayonet connection, have lost it all overnight.

9.    A tip we were told was to use a champagne cork, filed down to fit, as a plug for the diesel heater exhaust.  This not only stops dust getting in and clogging the muffler, but it also prevents insects from making a home in the pipe.

10. Don’t leave without Chocks and Blocks. We learnt this on a 36°C day around mid-afternoon, after travelling about 50km on a rocky dirt road when a sharp rock cut through the tread of our tyre – damaging it beyond repair. The whole exercise of getting back on the road took us about half an hour, but geez we were glad we had the extra Chocks and Blocks!