The dual cab is the hero of the one-tonne utes, both for work and play. But, despite being the most popular configuration, not everyone wants or needs a five-seater ute. The single cab has plenty going for it — it’s much cheaper than a dual cab and, for a couple who want to leave their van and head deeper into the bush, the single cab has one major advantage. That advantage is a much longer tray than a dual cab – the perfect basis for a tool box to store camping gear and on which to fit a roof-top tent.

The D-MAX SX is a pretty basic ute, but that’s its attraction for many — not to mention the lower price. The SX is one grade up from the base D-MAX EX and, while it isn’t loaded with luxury features, it does have all the basics covered. The SX comes with air conditioning, cruise control (with steering wheel-mounted controls), a CD/MP3/FM/AM/AUX four-speaker audio unit with Mini USB, iPod input and Bluetooth audio streaming, steering wheel-mounted controls for audio, a leather, tilt-adjustable steering wheel, and power windows and mirrors.

Safety equipment runs to front, side and side-curtain airbags, ABS brakes with EBD and EBA and traction and stability control. 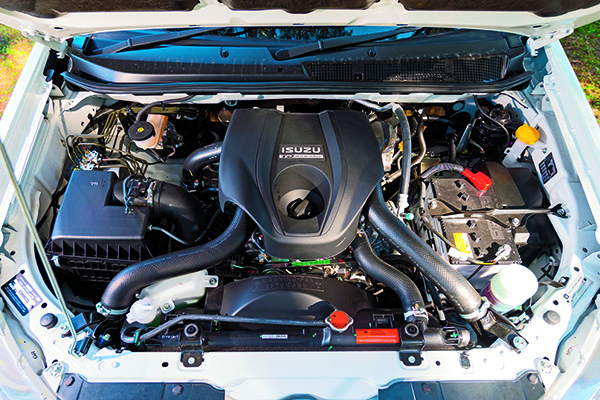 The SX doesn’t have carpet — flooring is vinyl — but it does have cloth seats. The aluminium tray is an optional extra.

The interior is, of course, fairly basic, but the seats are comfortable and there’s plenty of head and leg room. Vision out of the ute is excellent, of course, because of the large glass area around you. As soon as you have a large load in the tray or fit a canopy or tool box, that will all change.

The Isuzu has a 3L turbodiesel engine that has lower outputs than all its key competition.  Despite being a clattery diesel engine, there isn’t much turbo lag, and power and torque delivery is quite linear.

The D-MAX is also behind with its optional five-speed auto, as most other utes come with at least a six-speed auto now. But at least it has a manual mode and, like most modern autos, its software works out when you’re heading downhill and require engine braking. It’s downshift or hold a lower gear to help keep speed down. The transmission shifts very smoothly, and appears to have a good spread of ratios. Like most of the one-tonne utes, the D-MAX has a part-time, dual-range 4WD system. It’s activated by a console-mounted rotary dial.

Because the one tonne utes are designed to carry about a tonne (the SX can carry 1134kg) they need heavy-duty suspension. So a live axle with leaf springs is the way almost all of them go to achieve this and, of course, getting a suspension to ride well unladen as well as it does with a tonne on the back is not easy. So the unladen ride in the SX is pretty abrupt, and it skips a little at the back when negotiating big bumps.

The D-MAX isn’t the most dynamic of the utes (not that any of them are really) but can be pointed down a twisting road with some confidence. It’d be nice to have more steering feel, but at least it’s not vague or overly light.

As we’ve found testing the dual-cab D-MAX and its close relative, the MU-X SUV previously, the SX didn’t rip through a lot more extra diesel when it was towing. We averaged 8.9L/100km driving without a van on mostly intra-urban roads, and 11.6L/100km towing a 2120kg tandem-axle caravan.

The D-MAX was hitched up to a 2120kg tandem-axle full-size van with a tow ball load of 180kg. The suspension hardy moved with the ball load, although ride quality wasn’t as good as you’d hope with some ball weight — it felt as though it was oscillating a little. Stability was excellent, the caravan hardly even noticeable behind. Performance was also quite good, better than the dual-cab D-MAX LS-T we tested last year with a van of almost identical weight. The SX being 270kg lighter than the LS-T would certainly help.

A single-cab ute might not work for everyone, but the D-MAX SX Cab Chassis proved to be a very capable tow vehicle. It’s not the quickest ute out there, but it’s fuel-efficient, tows well and the price is right.

The full article appears in Caravan World #555 September 2016. Subscribe today for the latest caravan reviews and news every month!