Recently on our trip north we noticed several incidents of non-compliance with caravan park rules.

Now I'm not sure if many travellers ever do read the rules for the parks they visit, but I do. I'm quite interested in different rules for different parks, and some that apply to nearly every park. There are always conditions regarding dogs, and one is that they are not allowed into the amenities block or near a food preparation area.

At a North Queensland park a family took their dog into the showers with the kids. The dog actually rushed out from a shower cubicle and barked at a woman entering the amenities. The dog was soaking wet and its owner was in the shower. 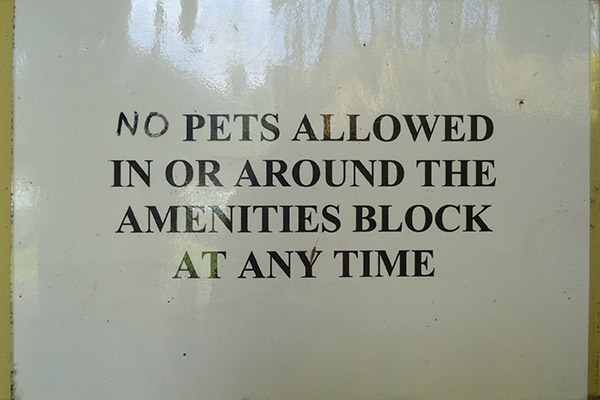 At the same tourist park, the owner had to speak to another person (with a different dog) who tied the dog up to a table where the roast dinner was being served. She moved the dog, but the first lady was asked to vacate the park.

There are rules regarding noise, and most parks have a "Quiet" time, usually somewhere between 9.30-10pm to around 7 am. I don't think people read or take notice of this rule, as we have often heard noisy neighbours talking loudly or laughing after late night drinks. Playing loud music can be a problem with some younger folks, and a lot fo people sit outside and talk and laugh loudly until late.

Some older people who are a bit deaf have their TV on loud. One night we had to wake a guy who had gone to sleep during a late night movie and at midnight his TV was causing a problem to people either side of him, particularly as the ads were much louder than the show.

Some parents leave their kids unsupervised. One very nice park we were visiting in NSW had a policy regarding children riding bikes and helmets. Several young girls were riding bikes without helmets and they rode at speed around the boom gates, apart from the young lass who did not see it and ran straight into it head first. She was seriously hurt, and I wondered if her parents had read the park rules regarding use of helmets.

The list goes on, and while there is obviously some leeway, the rules are there for people to enjoy themselves without upsetting others. Do you read the caravan park rules before settling in for the night?