Mark Quinlan — 4 March 2022
In last month’s issue we put a number of tow rigs through their paces. Here we check out another seven, so buckle up.

In 2020, Isuzu’s D-MAX Ute shocked rivals with the quantum leap it made in terms of safety, technology, and sophistication. In 2021, the brand’s MU-X wagon has proven it wasn’t a fluke by doing the same again.

The second-generation MU-X is again based on the proven platform and mechanics of the D-MAX, but with key changes that make the family wagon arguably even better suited as a long-range tourer and tow-rig. With its stronger body-on-frame chassis, re-engineered coil-sprung multi-link rear suspension, and increased front and rear axle load ratings, the new MU-X now boasts enhanced braked towing capacity of 3500kg with a 350kg ball load — that’s an improvement of 500kg and 50kg respectively on the previous model, giving the MU-X an advantage over rivals like the Ford Everest, Mitsubishi Pajero Sport, and Toyota Fortuner. Under the new-look bodywork is a stronger chassis that makes more use of high-tensile steel, with larger chassis rails, an additional crossmember, and new rear subframe cradle. 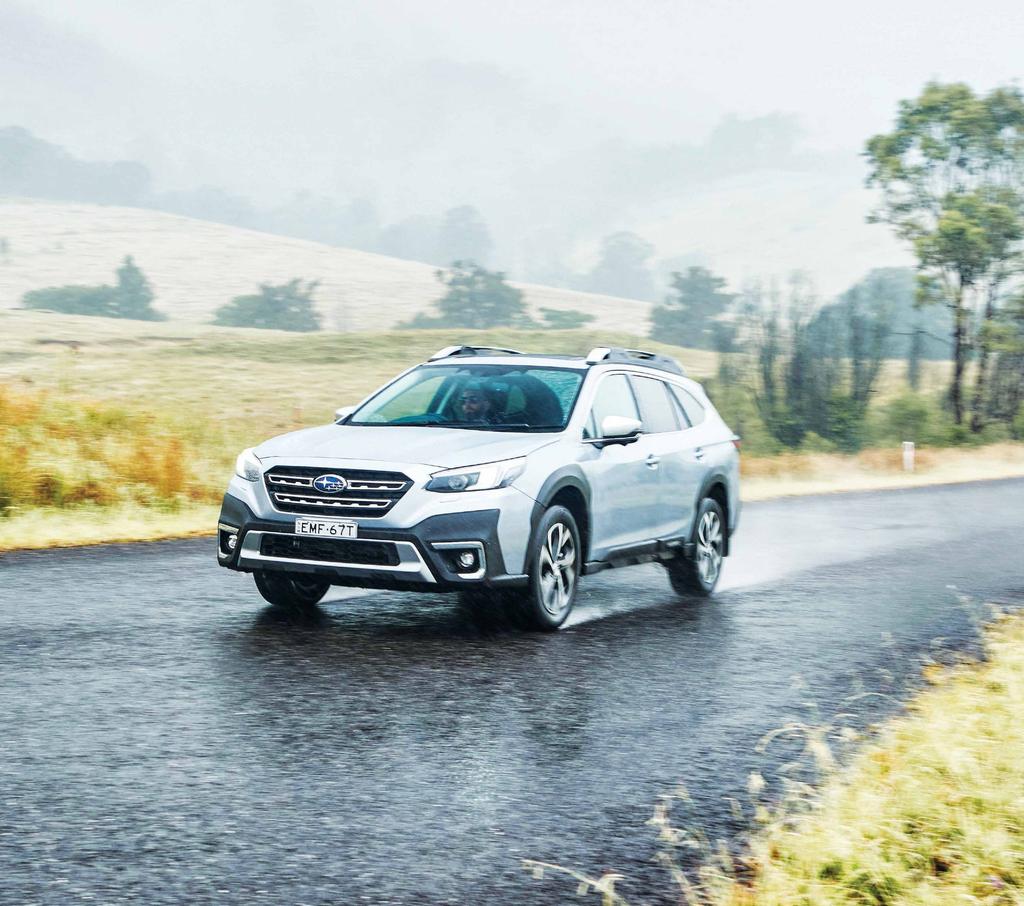 The second-generation MU-X is again based on the proven platform and mechanics of the D-MAX, but with key changes that make the family wagon arguably even better suited as a long-range tourer and tow-rig. With its stronger body-on-frame chassis, re-engineered coil-sprung multi-link rear suspension, and increased front and rear axle load ratings, the new MU-X now boasts enhanced braked towing capacity of 3500kg with a 350kg ball load — that’s an improvement of 500kg and 50kg respectively on the previous model, giving the MU-X an advantage over rivals like the Ford Everest, Mitsubishi Pajero Sport, and Toyota Fortuner. Under the new-look bodywork is a stronger chassis that makes more use of high-tensile steel, with larger chassis rails, an additional crossmember, and new rear subframe cradle.

As with the Patrol, the arrival of the LandCruiser 300 Series has made the Prado look a little long in the tooth.

Keep your eyes peeled, as rumour has it another update may be on the cards

This generation of the so-called ‘son of LandCruiser’ has been with us since 2009 and there’s speculation an all-new model will drop in 2023. Despite this, Toyota has kept the Prado competitive with two major facelifts and several minor updates during its lifecycle, the most recent of which came in July 2021. The updated Prado now features blind spot monitoring and rear cross traffic alert as standard on the entry level GX and GXL variants, joining the raft of previously available features such as high-speed active cruise control, lane departure alert with steering assistance, and pre-collision safety system with day/night pedestrian and daytime cyclist detection. The GX grades also feature more premium exterior appointments, including chrome-accented grille and puddle lamps, while the upmarket VX and Kakadu variants have been upgraded with larger and newly designed 19in alloy wheels.

The Prado remains a step below its heavyweight ‘father’ in terms of towing capacity, even despite a 2020 upgrade which boosted its braked towing credentials from 2500 to 3000kg. That update also boosted the performance of the durable 2.8L four-cylinder turbodiesel, with outputs bumped up to a healthier 150kW/500Nm. It’s the same unit used in HiLux and Fortuner so is well proven and mates to a six-speed automatic. With its strong ladder frame chassis, all-coil independent front and live axle rear suspension, the Prado is a solidly dependable tow rig that handles mid-weight towing duties comfortably. A reversing camera with guidelines helps when hitching up, while the driving position, comfort levels, and finishes are all to Toyota’s usual high standard.

Subaru claims the Outback’s heavily revised 2.5L four-cylinder ‘Boxer’ engine is 90 per cent new, adopting direct fuel-injection and other changes that boost power and torque to 138kW/245Nm. The extra grunt has facilitated a handy 500kg boost to the new Outback’s braked towing capacity, which is now 2000kg.

You have 552L of boot space to play with

Other technical changes include refinements to the continuously variable transmission, which features a wider spread of ratios for improved take-off acceleration and better fuel efficiency.

While you wouldn’t tackle the Simpson in it, the Outback also has a handy degree of rough terrain capability courtesy of 213mm of ground clearance, constant all-wheel drive, and Subaru’s X-Mode multi-terrain traction system. The ace up the Outback’s sleeve compared with most other vehicles here is its impressively comfortable and car-like driving manners, characterised by long-travel suspension that delivers excellent ride characteristics, and keen cornering grip in bends.

If you’re looking at the specs panel and thinking that 1243Nm torque figure must be a typo, you’d be wrong. Put it down to the growling 6.6L Duramax turbodiesel V8 in the snout of the hulking Chevrolet Silverado LTZ Premium HD, the biggest stick in the armoury of GMSV, the company that rose from the ashes of Holden in November 2020.

With the latest and greatest in tech, you'll be travelling safely

Like its stablemates the Silverado LT Trail Boss and the LTZ Premium, the HD (for heavy duty) is imported from the US and re-engineered to right hand drive by Walkinshaw Automotive Group. Unlike its petrol V8-powered namesakes, however, the Silverado HD drinks the oily stuff, which accounts for its suburb-shifting torque and prodigious tow rating.

In a nice touch we don’t often see on Aussie utes, the HD also features a power up and down tailgate that can be opened or closed using the key fob, a button on the tailgate, or a dash switch. Even that’s trumped, though, by the HD’s ‘invisible trailer’ feature which uses a pair of cameras to create and process images, which makes the item being towed disappear from the rear view. The advanced towing package also includes rear vision camera hitch guidance, hitch view, integrated trailer brake controller, and power extendable external mirrors.

Safety Rating: Not yet rated by ANCAP

It’ll be mid-2022 before we finally get to see Ford’s all-new Ranger in the metal, but the Blue Oval has revealed much of what we need to know already via pre-launch teasers.

Like its predecessors, a range of eye-catching colours are likely to be on offer

Headlining the comprehensive changes is the introduction of a new 3L twin turbodiesel V6 with 10-speed automatic and a full-time 4x4 system on selected models. The current 2L four-cylinder turbodiesel will continue in either single or bi-turbo configurations. Ford Australia held back on releasing power, torque, or economy figures but the V6 is the same ‘Powerstroke’ unit the company has previously used Stateside in the F-150, where it puts out a healthy 190kW/600Nm.

Other notable changes include an all-new exterior design that lends the Ranger a far more muscular presence, and a new-look interior that’s more comfortable and high tech. The new dash showcases a new digital widescreen instrument cluster and tablet-style infotainment screen, incorporating Ford’s latest and greatest SYNC 4 connectivity and entertainment system. A schmick new offroad monitor and 360-degree camera will be handy when hitching up, while other new features include clever new storage systems inside the cabin, an integrated sidestep behind the rear wheel on either side of the tub, and all-round ‘zone’ lighting for when working or setting up camp at night.

A longer wheelbase and widened track are part of a heavily revised suspension set-up, with the tray also widened by 50mm to now accommodate a full-size palette. The widening of the suspension allows greater axle articulation for better offroad traction, according to Ford, while the front wheels have been moved 50mm closer to the front to improve the approach angle.

With full pricing and technical details yet to be released, including the maximum tow rating (which we expect will remain at 3500kg), we’ve chosen to hold off on publishing speculative specifications.

The fourth-generation BMW X5 delivers handsomely on the German brand’s promise of eager performance and engaging dynamics, but in this case, the German SUV can also tow a decent load. The 2018 introduction of a factory-designed and installed towing hitch receiver, bespoke control unit and specific vehicle wiring harness is one of the automotive world’s better kept secrets but enables the X5 to handle loads of up to 3500kg braked, with a 280kg maximum downball load.

As part of the package, the standard surround view camera system offers an additional zoom function for the rear camera, while a trailer stabilisation system is also included. Under the X5’s chiselled bonnet is a 3L twin turbodiesel, delivering a smooth and lag-free 195kW of power and chunky 620Nm of torque. It’s all channelled through a crisp-shifting and intuitive eight-speed auto, and BMW’s proprietary xDrive all-wheel drive system.

The roomy and beautifully trimmed interior features an attractively designed high-tech dash with all the latest connectivity bells and whistles, including factory navigation and compatibility for Apple and Android smartphones.

The X5 M Sport also comes with optional adaptive air suspension, featuring a self-levelling function and adjustment for five different ride height levels, with a total sweep of 80mm. Thus equipped, the rear of the vehicle can be separately lowered via a tailgate button, to aid rear compartment loading and hitching. And contrary to the popular belief that BMWs are exclusively tarmac tearaways, the X5 also offers an optional BMW xOffroad Package, featuring aluminium underbody protection, an electronically controlled rear differential lock, and selectable drive modes for sand, rocks, gravel, and snow.

Imagine the look on the faces of those LandCruiser and Patrol owners when you come bumping into their off-the-beaten track campsite in your Bavarian bullet. Guten tag!

It seems there’s a locally remanufactured RAM for every stump-pulling job these days, with the new-for-2021 RAM 1500 DT Series joined during the year by the heavy-duty RAM 2500, and later still the biggest and baddest of them all: the RAM 3500 Laramie with its mammoth 1724kg payload.

More American utes are popping up on Aussie roads, and it’s clear why

For most caravanners trying to find the sweet spot between size, towing capability, and driving manners, we still rate the RAM 1500 DT as the pick despite it being available only with the 5.7L Hemi petrol V8. Despite this, it seems that even those hard-headed Yanks are getting the message about fuel consumption and greenhouse gases, with the new RAM boasting such fuel-saving tricks as active aerodynamic grille shutters and air dams, and cylinder deactivation. The 1500 DT also features a new eTorque mild hybrid system, designed to further improve efficiency and driveability. The system combines a belt-drive motor generator unit with a 48V battery pack to enable its start/ stop function, short-term torque assist, and brake energy regeneration. The result is a still mighty 291kW of power and 556Nm of grunt, but surprisingly reasonable combined cycle fuel consumption of 12.2L/100km.

Out on the road, the RAM 1500 feels every bit the big, barrel-chested beast that its imposing dimensions suggest, its substantial heft resisting side-winds and being bullied about by the trailer to ensure impressive towing stability. The Laramie comes loaded with kit — we’d spoil ourselves here and opt for the Limited, with its air suspension, electric auto-deploy side steps and suite of active safety features including adaptive cruise control, forward collision warning, pedestrian detection, ready alert braking, and trailer-sway damping control.

Safety Rating: Not yet rated by ANCAP