Western Australia is blessed with more than 12,000 species of wildflowers, 60 per cent of which are found nowhere else on Earth. They’ve adapted over millions of years to a wide range of habitats across 2.5 million square kilometres of the state’s mostly arid terrain. Every year they provide a dazzling spectacle of colour and fragrance that attracts an estimated 775,000 visitors for the pure pleasure of witnessing one of the most extensive floral displays on the planet. For six months these vibrant natural beauties carpet landscapes, from coast to forest and city to outback, in all the colours of the rainbow.

Typically, the wildflower season in Western Australia begins in the state’s north when they appear on the sprawling Pilbara plains in June and July, then sweeps progressively south along the Coral Coast and through the Mid West wheatbelts and goldfields during August and September, finishing with a flurry in October and November throughout the forests and coastal heaths of the South West. The 2018 season was the best and biggest display in over a decade thanks to copious rain and mild temperatures during winter and early spring.

‘Wildflower Country’, in WA’s Mid West, is rated as one of the best regions in the state to see wildflowers at their peak. Beginning about 150km north-east of Perth, the region sprawls across the northern wheatbelt for another 300km to embrace nine small towns that rejoice in their floral surroundings. Throughout August and September, these rolling landscapes are ablaze with colour, spectacular carpets of yellow, pink, blue and white Everlastings that stretch as far as the eye can see. Dotted among them or nestled in discrete enclaves are numerous other flowering species, including the unusual wreath leschenaultia, considered the ‘holy grail’ among botany buffs. 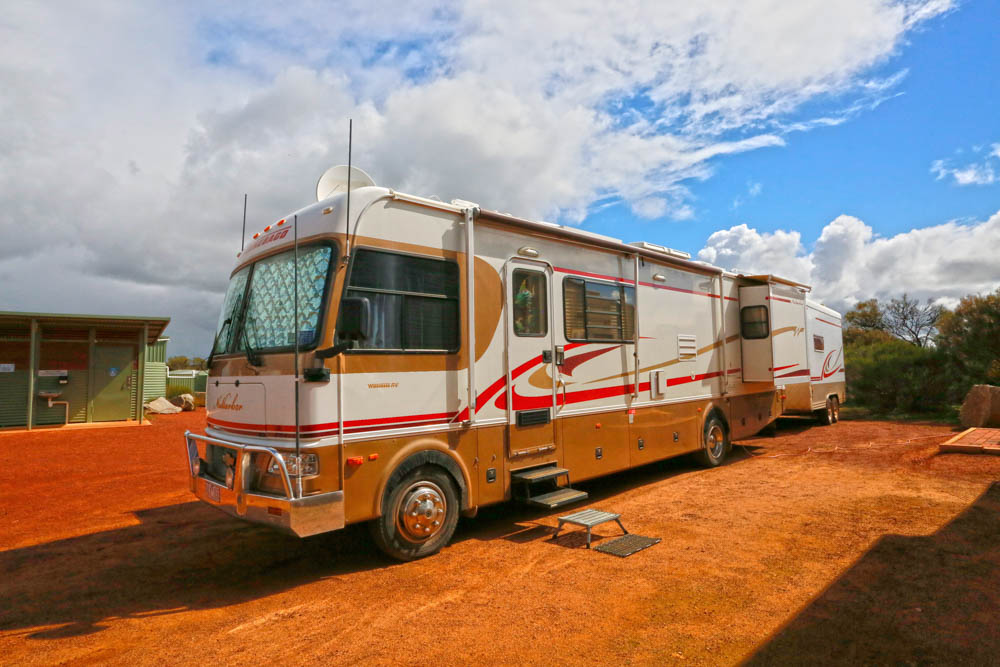 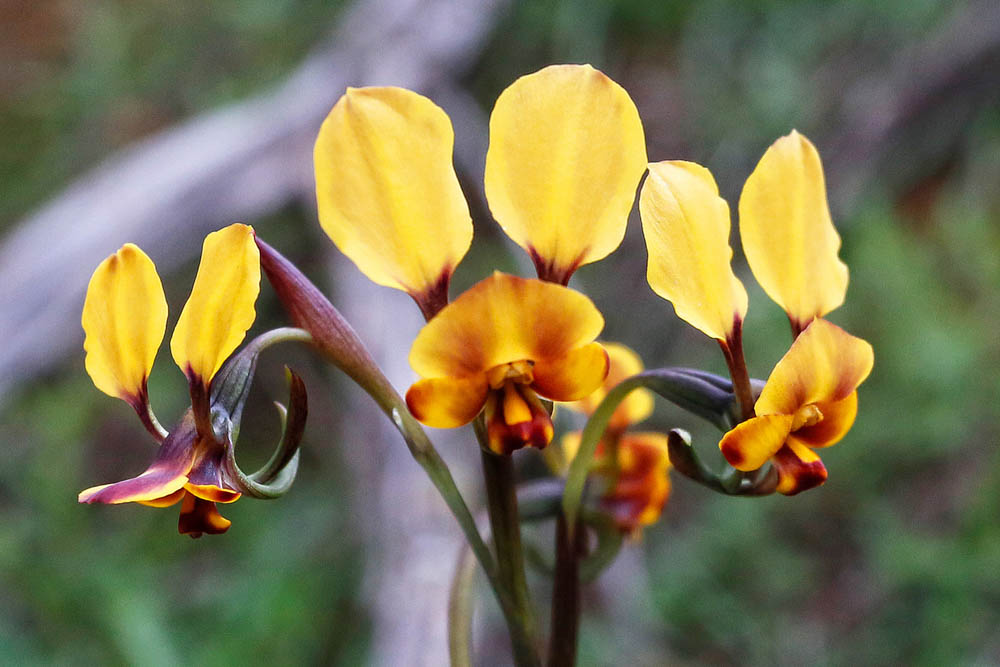 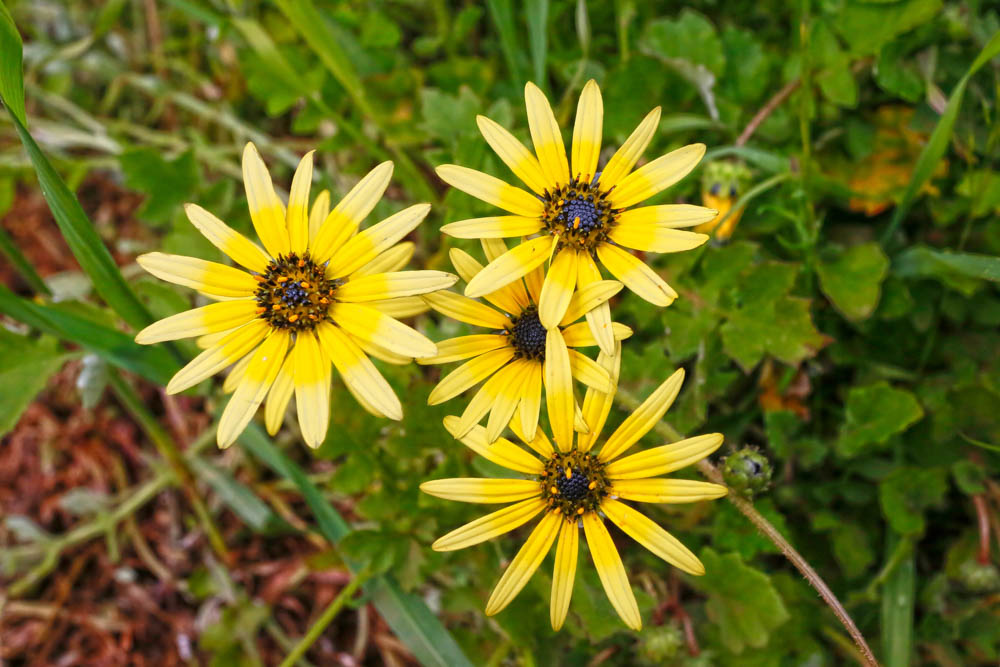 There are two main routes for exploring Wildflower Country, both beginning at Moora, 170km north of Perth. The 335km Wildflower Way is the more easterly route that passes through Dalwallinu, Perenjori and Morawa to Mullewa at the northern end. The Midlands Route avoids the main highways and traces a more central course for 194km due north from Moora via Coorow, Carnamah and Three Springs to Mingenew, where travellers can either branch off to Mullewa (84km) for more wildflowers or head north-west to Geraldton (104km) on the coast. Some of the rural back roads in Wildflower Country are unsealed and, although they’re generally good, dry weather surfaces, they may become unsafe and impassable after heavy rain.

Wildflowers are deservedly the main attraction during the season, but they are not the only highlight in this picturesque region. The towns along the routes are welcoming and worthy of attention, with many heritage features, nature trails and a year-long calendar of events and celebrations. Along both main routes are interpretive sites that highlight a fascinating range of themes and celebrate rural life with stories about the early pioneers.

Moora is the ‘Gateway to Wildflower Country’. It is the largest inland service centre between Perth and Geraldton, supporting a shire population of 6,000 residents engaged mainly in sheep grazing and wheat growing. In its virgin state, the area was a large salmon gum forest and many of these attractive trees still remain. The road approaching Moora is one of the most magnificent natural avenues to be found anywhere in the world. The town’s agricultural heritage and natural attractions may be explored by several excellent walking trails and scenic drives. The Moora Agricultural Show is held every September and includes a full equestrian program, fireworks, fashion parade and entertainment. The Moora Cup Race Day is one of the biggest events on Moora's social calendar and is held every year in October.

Ninety kilometres north-east of Moora, the quiet little town of Dalwallinu is the official starting point of the Wildflower Way. The town’s name derives from an Aboriginal word meaning "place to wait a while", which aptly describes the pleasant, relaxed ambience of ‘Dally’. The shire is overwhelmingly wheat country, with manicured oceans of grain surrounding pockets of rare and localised plants. It is probably best known for its magnificent displays of vibrant yellow wattles (186 varieties) that bloom for most of the year, peaking in early September to coincide with the annual Wattle Week Festival. The Dalwallinu Creative Arts Show is also held in September, biennially, attracting a huge number of high quality entries from all over the state.

Perenjori, 120km north of Dalwallinu, lies at the very heart of Wildflower Country. Its attractive main street is lined with large gum trees and a 1.35km heritage trail, known as the Peoples’ Pathway, linking an eclectic series of 24 rusty steel sculptures that depict the town’s first 100 years. Perenjori is also the site of the Church of St Joseph, built in 1937 by the famous Western Australian architect–priest Monsignor John Hawes. Rail enthusiasts will not want to miss the heritage-listed Caron Coal Stage, which highlights the golden age of steam locomotives in the region.

Morawa, 50km further north, is a typical northern wheatbelt town servicing the surrounding farms with a bulk loading facility, wheat silos, railway link and a small shopping centre. It has a number of attractions including the Church of the Holy Cross (another of Monsignor Hawes’ constructions) and the unusual small stone hermitage known as the Old Presbytery. The impressive Morawa Museum houses many relics of the town’s agricultural past and a remarkable collection of local windmills. Beyond the town, Koolanooka Springs is a popular picnic spot, and granite outcrops at Bilya Rock and War Rock provide great views. Morawa is one of the most prolific areas for native flowering plants and a locally produced handbook is a colourful guide to the many wildflowers found specifically in the district.

Located 43km north-east of Morawa on the Mullewa Road (Wildflower Way) is the village of Canna. The Canna Store operated from 1929 to 2003, but these days is a farm merchandise business servicing the local farmers. The proprietors have a wealth of knowledge on the local wildflowers and can provide you with a map of the 30-minute Canna Wildflower Walk along which the best specimens may be seen. Near the store is a free RV camp with hot showers, flushing toilets, water and a barbecue. Power is also available for a donation.

At the northern end of the Wildflower Way, Mullewa is renowned for the stunning displays of flowers and shrubs that bloom along roadsides and in the district’s nature reserves. Two flowers – the ground-hugging wreath flower, which blooms in a halo around a leafy centre, and the orange and scarlet wild pomegranate – grow in discreet patches in the shire. Mullewa celebrates the wildflower season with ‘Outback Bloom’, its annual wildflower festival held over four days in late-August or early-September. The Mullewa Muster and Rodeo (late May or early June) is the highest-paying prize money rodeo in the state attracting competitors from around Australia and thousands of spectators.

Returning south along the Midlands Route, travellers encounter the Coalseam Conservation Park, about 50km south-east of Mullewa. While the Park is rich with geological features and steeped in pioneering history, it’s the views that are truly inspiring with some of the most unique wildflowers in Australia carpeting most of the park’s vast area.

Thirty kilometres further south is the town of Mingenew, which celebrates its wheatbelt heritage with the unique ‘Big Wheat’ Sculpture and a bulk handling wheat facility with a holding capacity of 403,000 tonnes, the largest in the Southern Hemisphere. Located southwest of the Recreation Centre, the Mingenew Wildflower Walk is an ideal place to experience the many varieties of local wildflowers including orchids, pink and yellow everlastings, fringed lily, cats paws and thryptomene. Mingenew Hill is a stunning formation swathed in abundant wildflower species, with sweeping views over the town and the surrounding patchwork of vibrant yellows and greens.

The quaint little country town of Three Springs, 53km south of Mingenew, is renowned for its picturesque setting amid broadacre wheat fields and the towering silos that dominate the townscape. A pleasant stroll on the Heritage Trail will acquaint visitors with many historically interesting buildings - the Commercial Hotel, the National Bank, the Post Office, the Three Springs Hall, and the Kia Ora homestead – and the colourful Wildflower Mural painted by local artists to showcase the local species. The Visitor Centre features a beautiful garden of unique native plants surrounding a large talc rock from the local mine. Over 400 specimens of local flora are displayed at the Centre’s herbarium.

A scenic drive along Robinson Road and Arrowsmith River Crossing is rewarded by the sight of wildflowers galore by the roadside. Further afield, Dookanooka National Park is impressive with its spring blooms and a large stand of natural bushland that is home to a rich variety of native fauna. The Yarra Yarra Lakes Nature Reserve encloses an intermittent salt lake system which attracts flocks of swans, pelicans, ducks and Siberian stilts, in numbers that delight keen birdwatchers.

Carnamah, 20km south of Three Springs, takes its name from the pastoral property established by the Macpherson family in this locality in 1868. Their heritage-listed homestead is one of several beautiful historic buildings that grace the town. Though the town itself is small, it is the administrative centre for a shire that covers more than 2,800 sq.km and services a highly productive local agricultural industry. The recently upgraded Cooperative Bulk Handling receival site (where grain is delivered and stored until sold) registered a record 382,236 tonnes for a single harvest in 2016. The town and surrounding area is renowned for being one of the richest wildflower destinations in the state and home of the endangered Carnamah (or Harlequin) Bell.

Several nearby locations are noted for the richness and rarity of their seasonal wildflower displays, including Tathra National Park (Tathra being the Nyungar word for ‘beautiful place’), Beekeepers Reserve and Stockyard Gully Reserve. Wildflower Drive, along the Carnamah-Eneabba Road, will delight enthusiasts with the beauty of its floral abundance and the photographic opportunities along the route.

Continuing another 27km south along the Midlands Route brings the wildflower safari to the charming inland farming town of Coorow. On the eastern outskirts of town, Coorow Farm hosts a walking trail with abundant flowers and a great view of the countryside from the top of the hill. Further to the east lie fertile red loam farmlands along the Coorow-Latham Road, a designated Flora Drive lined with large salmon gums that shade colourful carpets of everlastings, orchids and wattles.

From Coorow, a sealed road runs westward to the shire’s coastal boundary and the twin hamlets of Green Head and Leeman. Fifty kilometres from Coorow the road bisects the 8,500ha Alexander Morrison National Park, where undulating sandplains and rocky outcrops harbour one of the finest wildflower reserves in the State. Walking trails meander through a complex of tall eucalypt woodlands, thickets of flowering acacias, banksias, hakeas and grevilleas, as well as smaller varieties of yellow verticordia, WA Christmas Tree, smokebush and kangaroo paw. The proliferation of poison pea saved this area from clearing for stock pasture and, instead, provides habitats for native birds and animals.

The final 90km of the Midlands Road to Moora closes the loop through Wildflower Country. About halfway along it, an unsealed road diverts to the west into the 44,300ha Watheroo National Park, a sandy plain covered in heath, banksia and mallee thickets and abundant wildflowers that include the extraordinary bush cauliflower and scarlet feather flower. Within the park, Jingamia Cave is a shady picnic site among rocky outcrops with a view across the bushland. Further south, Midlands Road passes through Coomberdale, home to the 1,600ha Western Wildflower Farm and Interpretive Centre, which cultivates a unique collection of WA wildflowers and dries them for export to eleven countries. The farm has a restaurant and gift shop that showcases the local product.

If you’re travelling in Western Australia between July and November, be sure to visit Wildflower Country and be amazed by the greatest floral show on Earth.