There’s no truth to the rumour that the Canberra region is not a caravanning destination. Let me tell you why.

The trick to visiting Canberra is to look at it as a region and not a city, to look beyond all the staid galleries, museums and public buildings. 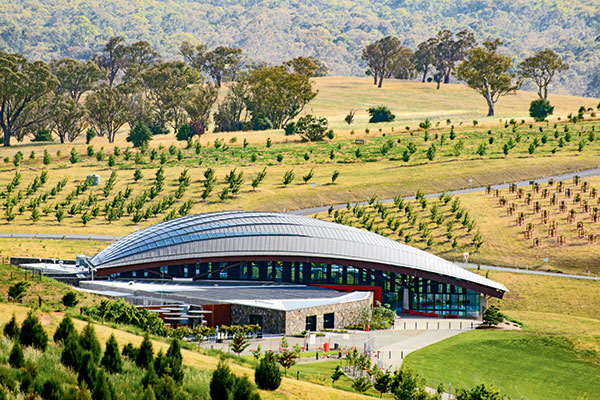 After my Parliament House lookout adventure, I retired to its cafeteria and, while musing over whether to have a lamington or a pie, I quit my quiet contemplation of the vastness of the building and took to the road on a food and wine quest. It was an unsurprising epiphany really considering I’d been ruminating under a vast parliamentary flagpole that from a certain angle somehow resembles a rack of lamb. Take a look next time you’re in town.

Anyway, that got me thinking that I needed to discover if the region is rather more than just a compendium of neo-classical colonnades or an overture to Australian democracy. Surely it was a clandestine trove of gourmet delights waiting to entice the travelling gastronome. And all I needed to do was drive.

To start, I set up camp at Alivio Tourist Park, just five minutes from the city centre. Alivio has something for every traveller with caravan sites, villas, cabins and motel rooms nestled into the side of gently sloping bushland. Although the caravan sites are a little snug, the park boasts a pool, barbecue area, clean amenities and quality camp kitchen. For those who don’t want to cook, there’s a fine cafe open for breakfast, lunch and dinner. Let me tell you, the buffet breakfast is scrumptious. However, I needed more to satisfy my inner foodie.

Every region has its food trail and the Canberra region is no exception, although its food and wine trail, known as the Poacher’s Way, has drifted towards obscurity recently. More’s the pity; on name alone it conjures notions of Robin Hood-style characters stealing the landed gentry’s game to feed the poor. Nonetheless, this tour needed to be more than a romantic egalitarian ideal – it needed to be a truly worthwhile experience.

My Canberran foodie trek started not with a food experience but with a remarkable view overlooking the city and surrounds from the National Arboretum.

The Arboretum sits on the tip of the Acton Peninsula, surrounded by Lake Burley Griffin not far from the Australian Institute of Sport. The Arboretum is a mountain of trees, and each type reflects an aspect of Canberra.

The view from here is splendid in the morning light overlooking the mirror-like surface of Lake Burley Griffin dancing between the rolling hills and valleys that embrace the national capital. It’s the sort of remarkably peaceful environment that makes for a good start to any tour.

By the way, take the time to drop by the nearby AIS – it embraces the art of healthy living as much as it helps prepare Australia’s high performance athletes.

My first foodie stop was Braidwood, just an hour east of Canberra. According to the NSW State Heritage Registry, the entire town is an excellent surviving example of a Georgian period town plan, dating from the late 1830s. That alone is enough reason to poke around.

Among the historic buildings is the Braidwood bakery that dates back to 1810 and isn’t a bad spot to try a quality cake or pie. Other historic buildings around town include the Royal Mail Hotel, which was used in the 1970 film Ned Kelly, then there’s the courthouse, police station and old cemetery. The Royal Mail Hotel not only dishes up a reasonable chicken parmigiana, it boasts its own ghost – fowl play perhaps.

Murrumbateman, another of the Yass Valley villages is quaint. Just a short hop from Gundaroo, Murrumbateman is a relic of goldrush days and an anachronism with a curious name. Legend has it the name came about when a rowdy customer asked a pioneer innkeeper called Bateman for another round pleading: “More rum, Bateman!”

Whatever its aetiology, I say Murrumbateman is worth a visit. Amongst the pastoral landscape are award-winning wineries and interesting providores.

While in the neighbourhood, I heard a whisper about Helm Wines. It’s been producing fine wine since the 1970s with the cellar door in an old school house. Unfortunately, the road to it is dirt, and bad weather made it a little too slippery to visit. I’ll try again next time around, especially as on every second and fourth Saturday of the month local craftspeople and makers converge at the Recreation Grounds for the Murrumbateman Village Market that offers handmade pottery and candles, wines from local vineyards, native plants and plenty of food.

In case you need another case of wine, there’s also the Mount Majura Vineyard at Queanbeyan, which you can find on your way back to Canberra. Current winemaker Frank van de Loo took over managing the vineyards in 1998 and is known for his tempranillo variety. Those that love travelling with pets might get to know the vintner’s dog while you’re there, a beautiful Maremma sheepdog called Rex.

After contemplation of my gastronomic consumption, the Canberra Region – or the Poacher’s Way in upmarket circles – is a foodie destination well worth exploring.

The full destination feature appeared in Caravan World #561. Subscribe today for the latest caravan reviews and news every month!