Carolyne Jasinski — 31 December 2021
This ancient meeting place in South Australia’s Ikara-Flinders Ranges has a rich past
To most people, Wilpena Pound is a geological wonder — a giant amphitheatre hollowed out by time and erosion. At 17km long and 8km wide, Wilpena Pound is so large that it could fit Uluru inside its circular walls eight times over.

Located in South Australia’s Ikara-Flinders Ranges, it’s the heart of an extraordinary landscape of rugged mountain ranges and dramatic gorges that science says is at least 800 million years old. We have Reginald Sprigg’s discovery of Ediacaran fossils — the oldest multicellular life form on the planet — to help prove the timeline.

But to the Adnyamathanha (pronounced Adnamutna) Indigenous people, the Ikara-Flinders Ranges are so much more — it is where life on Earth began, and where the spirits of their people live on forever.

Thousands of years of rich Indigenous heritage give a spiritual meaning to the physical features of this ancient landscape. 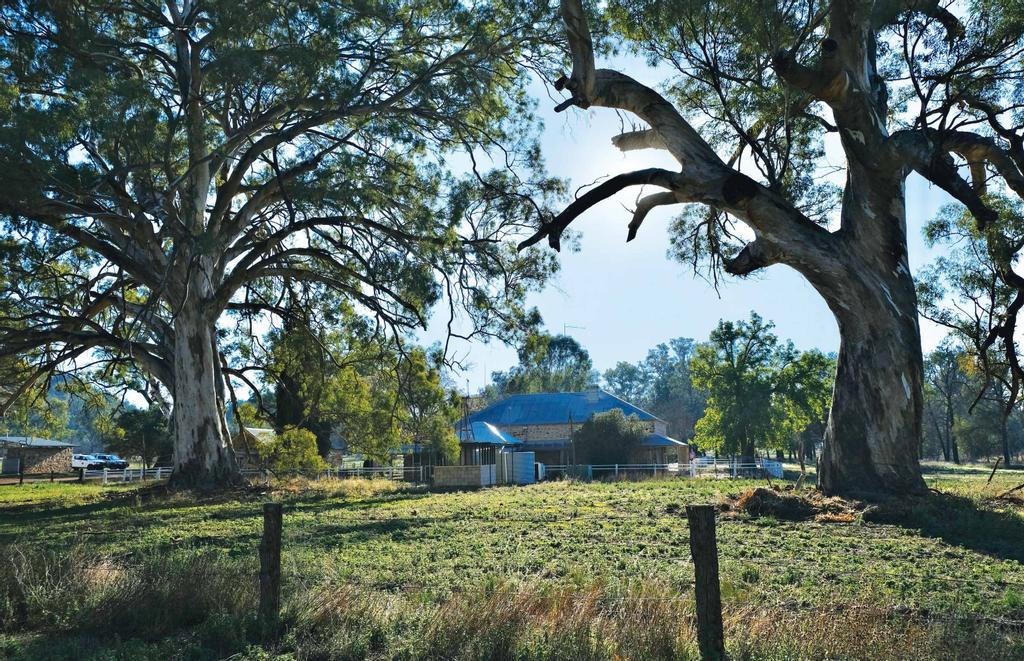 According to Dreaming stories, the Pound walls are actually the bodies of two intertwined Akurra (giant serpents). It’s a gruesome tale and one told best by Indigenous guides like Vince Coulthard (junior).

“The story starts with Yurlu, the kingfisher, at Mount Termination to the north,” Vince explains, while standing on top of Stokes Hill in front of a 3D model of Wilpena Pound. We’re here for a Sunset Spectacular tour, one of the Indigenous offerings at Wilpena Pound Resort.

“Yurlu’s job was to run ceremonies. He was the bloke in charge of getting everyone together for an important corroboree at Ikara.

“On the way south, he made a signal fire. The smoke was a sign that he was on his way to the ceremony. That fire created the coal at Leigh Creek and at other sites along the way.

“But it was also seen by two Akurra — giant snakes — who were also heading south.

“The people who were already at Ikara saw bright stars and took this as a sign to start the ceremony. They didn't realise that the stars were actually the eyes of the Akurra.

“The Akurra came up on either side of the ceremonial ground in whirlwinds and ate the people. Then they were so full, they willed themselves to sleep and died.

“That’s where they now lay. The southern side of Pound is the male snake and on the north is the female…with her head at St Mary’s peak. All the jagged bits are the people inside the Akurra with their spears, trying to get out.”

And that is, according to the Dreamtime story, how Wilpena was formed.

When you see the 3D model at Stokes Hill Lookout, in aerial photos or on a scenic flight, the description makes perfect sense.

Vince Coulthard is just one of the Indigenous guides at Wilpena Pound Resort that loves sharing stories and information about their connection to the land.

“Sharing our culture through tours breaks down barriers,” she says.

“Being able to share our culture is an amazing feeling. And it creates more employment and that has a massive effect.”

Indigenous experiences like the Sunset Tour, Welcome to Country ceremonies and guided walks to places like Arkaroo Rock, with its 40,000-year-old rock art, and Sacred Canyon, with 30,000-40,000-year-old etchings, are available from the resort year-round. But they come under the spotlight annually during Naidoc Week.

Naidoc Week originally stood for National Aborigines and Islanders Day Observance Committee, though the acronym has now become the name for the week itself. What it equates to, though, is much more meaningful — a week full of nation-wide events to celebrate the history, culture, and achievements of Indigenous and Torres Strait Islander peoples. This year’s theme is ‘Heal Country, Heal our Nation’.

It’s a time when hundreds of people get a taste of Indigenous life and beliefs through a range of activities at Wilpena Pound Resort including an art exhibition and Yura Bush Walks into the Pound and up to Wangara Lookout.

Jacquie Hobbs is one of the guides on this tour, which is suitable for all ages.

Surrounded by Aussie bush, creeks and billabongs, we get lessons in bush tucker. The vegetation takes on new meaning when we learn which certain plants are good to eat, or to use in drinks or as medicine. Some will get rid of warts, while others will relieve constipation, and the sap from one tree is a good substitute for honey.

The walk leads to the Hill homestead, the base for what was a huge sheep station in the middle of the Pound — until drought decided otherwise and the station owners were forced to move further south.

Wangara Lookout, though a steep climb, offers great views inside the Pound walls.

A highlight of Naidoc Week is a special Parks Events day organised by the National Parks and Wildlife Service at Old Wilpena Station.

Welcome to country ceremonies clear the air of bad spirits and announce our presence to the ancestors — it's a lovely way to let their loved ones know they are never forgotten and always respected.

There are damper making classes, boomerang making and throwing lessons, arts and crafts to make or buy, wood carving and rock etching.

People also line up for an Indigenous cook-up. Vince Coulthard (senior) is in charge of the hot coal oven.

“We’ve had the fire burning all night in the pit,” he says. “The coals are ready. Now we just need to prepare the meat. The boys caught a roo last night and they’re out getting an emu this morning.”

The kangaroo is butchered, skin still on so it takes the brunt of the heat. And when the emu arrives, it’s plucked — with the help of all visitors who want to have a go — and both go in the coal pit.

If you think this is all just for show, think again.

“This is the best way to eat,” Vince says. “Sure, we go to the supermarkets just like everyone else, but this is how we prefer to eat.”

While you’re at Old Wilpena Station, it’s a good chance to explore the old buildings that have been restored and turned into a museum. Wilpena Station was a working cattle station for 135 years, and closed in 1985.

Ikara has been a meeting place for thousands of years, and that continues at Wilpena Pound Resort with a modern twist.

As well as the Indigenous tours, there are scenic flights and 4WD tours, and plenty of self-guided hikes to take. Note, though, climbing to the top of Saint Mary Peak is not allowed.

“The peak is the head of the female Akurra, so it is a sacred women’s site,” Vince Coulthard said.

“So, if something goes wrong, I can’t come up and get you. And the women don’t want to have to come out and get you.

“Besides…if you have an accident, who wants to wake up on the nose of a snake!”

Wilpena Pound is 430km north of Adelaide, about a six-hour drive. Clare Valley makes a nice diversion along the way.