Julia D'Orazio — 5 March 2022
Forget the fancy — located at the southern tip of Ningaloo Marine Park is Gnaraloo Station, which has everything you need

Western Australia's 90,000-hectare working merino sheep station is like a theme park for thrill-seekers minus the fanfare. It's remote, off-grid and offers a real sense of escapism in its ‘desert meets sea’ outback location. You could call it the real Wild Wild West.

And many who thrive off rustic living stay weeks or months on end to take full advantage of the wilderness destination. With the Ningaloo Reef, world-class surf and epic driving trails in easy reach, could you blame them? 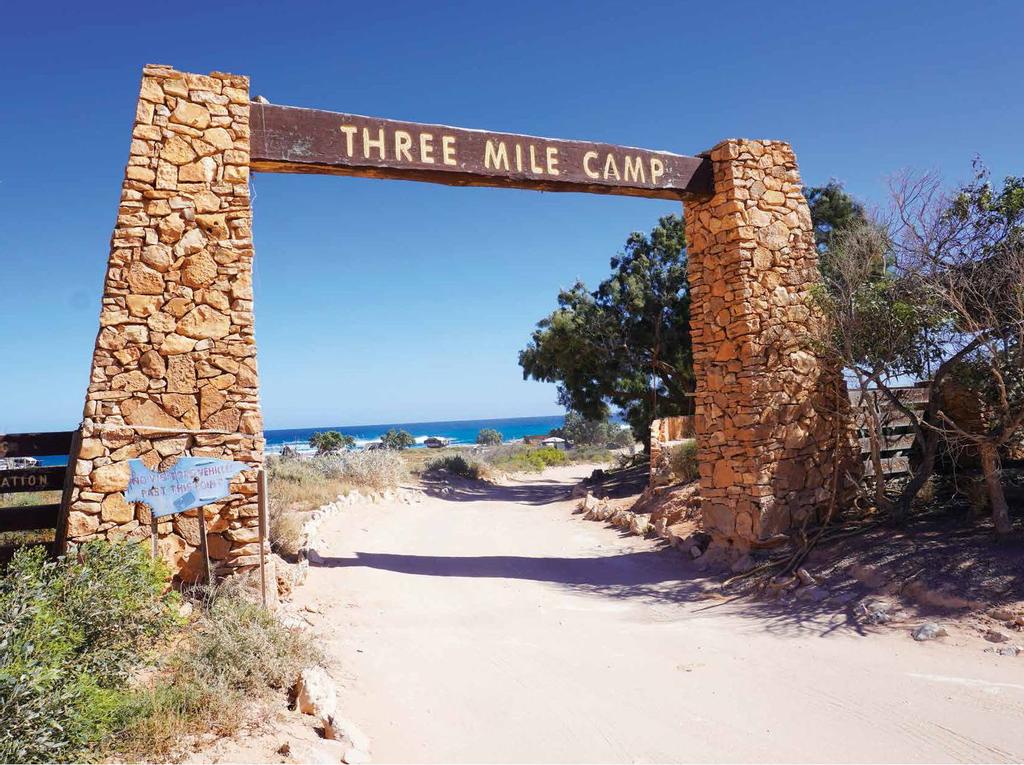 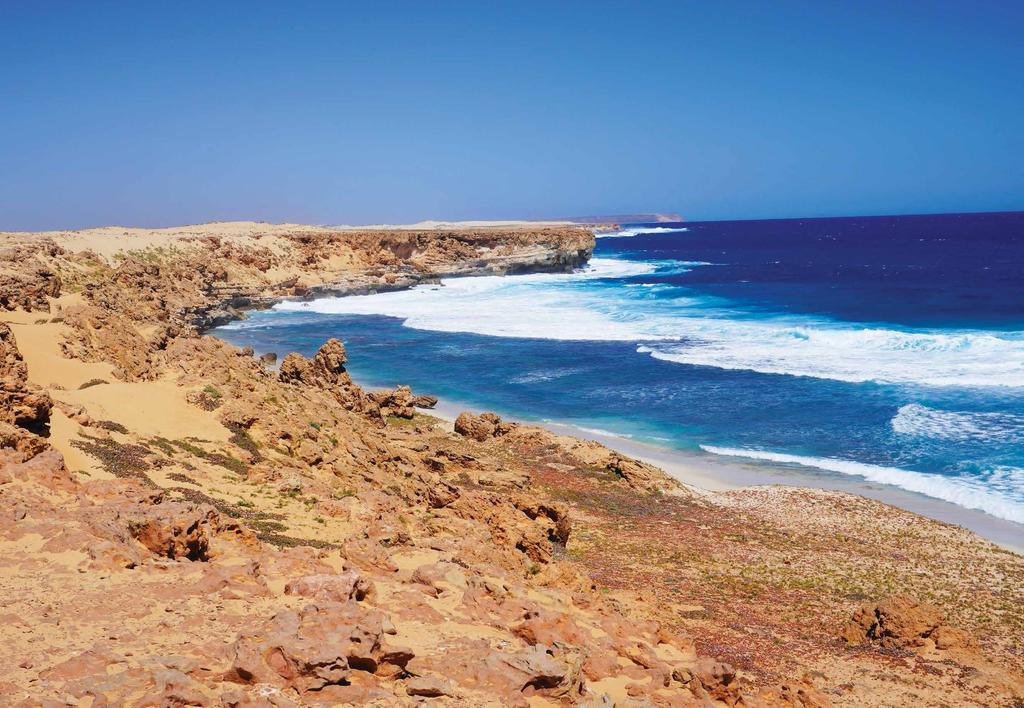 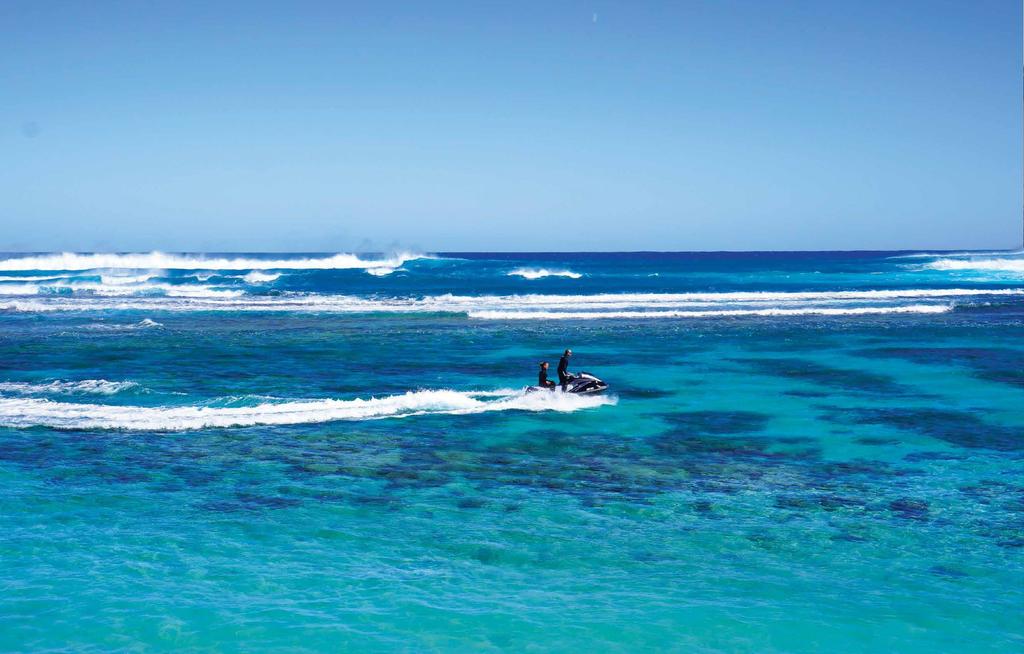 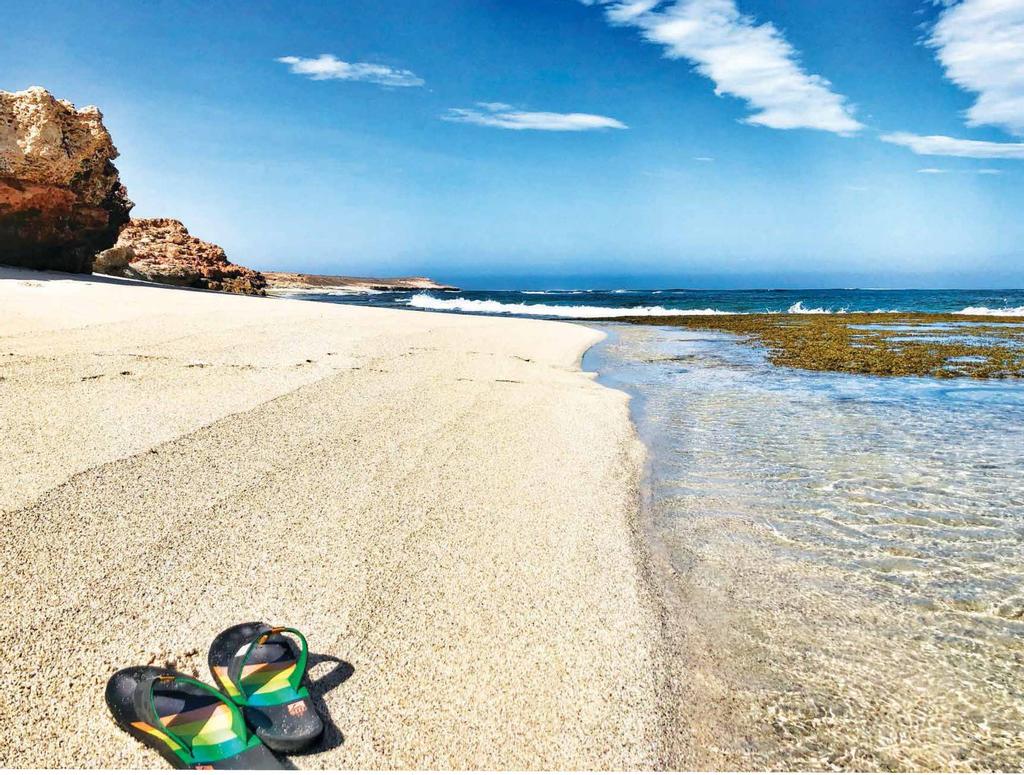 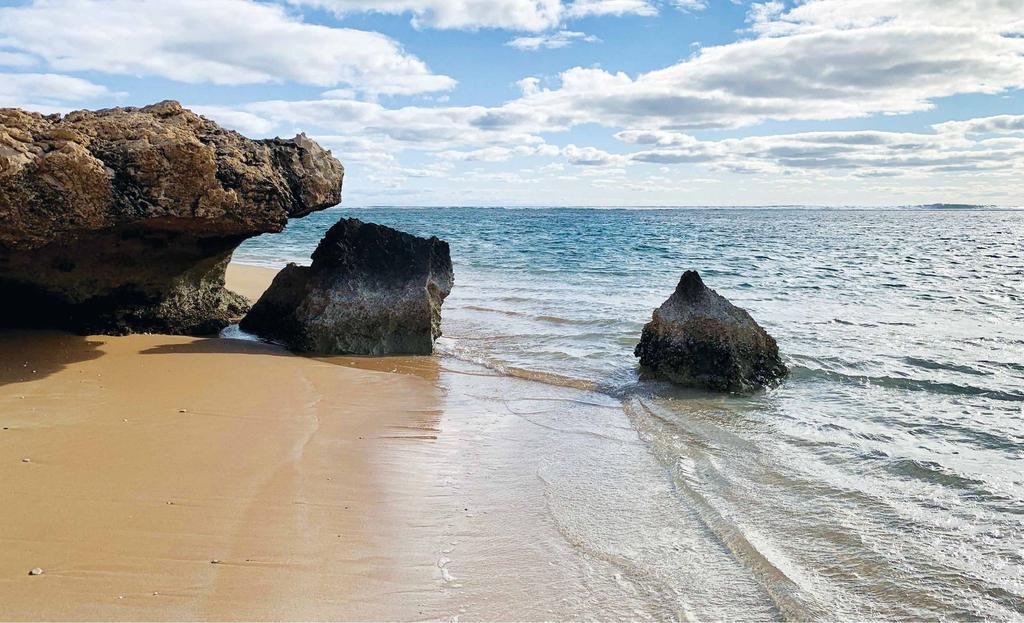 THE ROAD TO REMOTE

Before fleeing civilisation, my partner and I stocked up on supplies in Carnarvon, 896km north of Perth and 150km south of Gnaraloo. The sleepy coastal town is the last port of call to purchase fresh goods as a 'quick dash' to the supermarket would be a four-hour round trip — uh, no thanks.

After passing WA's presumably most Instagrammed signpost, the menacing 'King Waves Kill' and Quobba Station, it was one bumpy ride along unsealed corrugated roads with the tyres at 20psi to reach our outback oasis. Its roads are not exactly ones to trailblaze along, but I guess it's what makes the adventure feel authentic — and in need of a decent massage after. But it would be the sight of another marker that would really excite us.

Gnaraloo's imposing 3 Mile Camp flat stone archway sits on top of a hill, over a one-way road that cuts through the centre of the sloping campground towards the sea. After an 11-hour drive from Perth split across two days, it was a long-awaited welcome sign. We had arrived.

A late afternoon sun glow made 3 Mile Camp appear like a promised land. A Holy Grail for ocean babies and adults with their ‘toys’ — jet skis, surfboards, SUPs, small boats — whatever floats. Its peach-coloured dirt roads illuminated beside the patchwork of thirsty shrubs, bursts of colourful wildflowers and the odd tree here and there. Massive waves crashed in the distance, far from the shoreline, with the Indian Ocean's roaring soundtrack on repeat. The setting is far from something you'll see splashed on postcards, but that's what makes it so real: it's a refuge for the restless.

The campground à la coastal commune features 65 unpowered sites facing the rumbling surf and each equipped with a rock fire pit resembling a Colosseum. Three toilet blocks with hot bore water showers dot the campground, each with outdoor sinks for laundry and kitchen clean-ups. However, not all campsites are equal, with ‘primo’ oceanfront sites booked out far in advance to secure undisrupted, front-row views to breaching humpback whales and, of course, a beach sunset. How's that for entertainment?

After chatting to a few campers, it seems that many make the pilgrimage each year to this rustic retreat. And you could tell.

There was an elaborate set-up I dubbed ‘Tent City,’ a mishmash of tarps to shield away holidaymakers from its centrally located prime position along the coast. The strung-together settlement was also equipped with its own skyscraper in the form of a private phone tower. Clearly, these campers were staying put for some time. (We later found out three months every year, to be exact).

Then there are the repeat ‘blow-ins’ who would set up a long-term camp but, depending on winds and what’s happening generally, would hop over to nearby surfing destination Red Bluff (29km) for its iconic left point break and legendary mango smoothies.

But for those who come for a ‘fleeting’ holiday, 3 Mile Camp is a reprieve from life's rings and pings. There is only sporadic phone reception here at the lone water tank that's perched on the hilltop next to reception. An old car seat sits idle under the shadows to make that desperate attempt for a bar of reception a bit more comfortable. But if needing to phone home, Telstra phone booths are located next to the entrance and free to use, so keep the spare change.

But why be in touch with reality when paradise is on your doorstep?

I never had so many conversations about the wind, but it sure does dictate the daily grind.

If you aren't dependent on the wind factor to have fun out on the water, days need to start early before the winds become unrelenting and make some activities anything but pleasant. (Not that getting up early is a chore here).

Waking up with a morning cuppa and trying our luck spotting humpback whales on the far horizon soon became a daily ritual. We kept a keen eye out for flukes, flippers, black and white bellies, and scored brownie points if we spotted one breaching. Luck soon became the norm with how frequently we saw WA’s returning residents, with an estimated 40,000 humpback whales migrating off the coast each year.

Still, the moment we saw an ocean giant hurling its body towards the surface then slowly disappearing into ocean depths and leaving behind more bubbles than an eight-seater jacuzzi spa bath would always be an incredible moment.

Big splashes aside, the toughest question faced each day would be deciding where to make our own splash.

In a place fringed by inviting azure waters, it became a question of how active — or inactive — we were feeling. Did we want to be sun-kissed sloths on the sand? Or did we want to practise our scissor kicks exploring Ningaloo Reef within a flipper stride from shore?

The answer was always the latter, especially as a colourful universe was within easy reach.

Three Mile Lagoon is a short stroll from the campground, with the protected sanctuary zone's translucent waters teeming with marine life. The lazy snorkel spot is home to over 170 fish species, including wobbegongs, emperors, blacktip and whitetip reef sharks, and is marked with vibrant coral bommies and intricate reef systems. It's also home to ‘turtle highway’ with sea turtles often sighted at high tide. Spot the knobby head above water!

(On a side note, the station runs the Gnaraloo Turtle Conservation Program, which helps to protect two turtle rookeries along the Gnaraloo coastline — Gnaraloo Bay Rookery and the Gnaraloo Cape Farquhar Rookery — where loggerhead turtles are the primary nesting species.)

Most days started with a snorkel session which I liked to call my ‘dopamine dip.’ Entering the lagoon's refreshingly cool, clear waters not only gave me such a rush, but I got my kicks out of observing the rush hour of marine life passing by. A constant stream of beady eyes darted around me, all too nonchalant about my curious ways.

TOMBS FOR THE LIVING

With afternoon winds sometimes too uncomfortable to bear, it was the perfect excuse to watch people have the time of their lives.

Named after its tombstone-shaped coastal rocks, Tombstones or Tombies as it’s locally called, is a sought-after surf destination. It attracts the most intrepid surfers for its left-hand rolling barrel from start to finish. Considered a ‘diamond in the rough’, Tombies proves challenging for experienced surfers when at mid to high tide.

Located 2km from 3 Mile Camp, the road to seeing live extreme sports was extreme in itself. It was as if we made our mission to the moon via Landrover with how craggy the terrain was to get there. Like we were driving on craters with the number of ups, downs and thuds it took to watch these surfers at play.

"Careful, careful!" I shrieked. (Belated apologies to my partner who endured my commands in high decibels.)

We joined the carpark audience to watch only the brave and bold take flight. No matter the conditions or how the waves were breaking, it seemed that Tombies was always a hive of activity. We spotted kites a mile off, and whether it be surfers icing their cake when the swell was right or wind/ kite surfers taking advantage of the winds, people were always out there joyriding.

As swell lines moved steadily towards the shoreline, you could anticipate the next big wave. Would that surfer I was observing take the plunge? Or would they wait for the next one?

Soon enough, off they went, zooming down the barrel, trying to outlast these giant waves from closing in. Up and down, darting along the waves like it was child’s play. As waves crashed, ocean spray shot high into the air. Whoa! It’s such an exhilarating sight — even from the safe confines of a carpark.

A TRIP TO THE UNDERWORLD

The isolation of Gnaraloo has done wonders for the Ningaloo Reef. Here, the fringing reef system thrives.

Besides 3 Mile Lagoon, not far from Tombies is Midgies Beach. It’s a convenient tag-along visit if not keen to revisit the ‘moon’.

The rocky coastline of Midgies makes it a perfect place to find your own groove and tune out other beachgoers. It’s an excellent spot for a shallow snorkel, but one that needs to be explored carefully. Its brightly coloured reefs almost touch the ocean’s surface, and depending on the tide, it can make for a nerve-racking snorkel to avoid accidentally kicking or bumping into corals and being a real fish out of water.

Meanwhile, postage-sized nudibranchs, broccoli-shaped corals — green, purple, blue — parrotfish, and even the long, sharp barb of a stingray caught my eye. Watch out.

Find your own groove on Midgies Beach and enjoy the serenity

Further afield nearby Gnaraloo Homestead is Gnaraloo Bay. The white sandy beach is the crown jewel for snorkelling in the area, with its turquoise waters populated with massive coral bommies seen from shore.

The reef extends from around the bay's left corner — Nature Bay — to arrive back near the carpark. There is a current running north most of the time, so it’s possible to snorkel without much effort and go where the tide takes you. My kind of joy ride!

‘Nearby’ favourite family holiday destination Coral Bay (339km north of Gnaraloo) may lure people to its coral gardens, but this bay takes the cake with its kaleidoscopic reef.

Unlike Coral Bay, we had this incredible area to ourselves. It's no wonder why people make an annual pilgrimage to Gnaraloo, and it looks like I'll be joining too.