It may seem strange to mention Tassie and beaches in the same sentence, but the fact is that Australia’s smallest state boasts some of the most beautiful beaches in the world. Lapped by the crystal-clear waters of Bass Strait, the North West region shelters many sugar-white strands bookended by rocky headlands and backed by verdant hills that stretch inland to Cradle Country. Shadowing the Strait for 125km from Devonport to Stanley, the Bass Highway connects large urban centres and a profusion of villages, where the sea dominates lifestyle and leisure.

You’ll need a couple of weeks, preferably in the summer months, to experience all that this remarkable region has to offer — spectacular geology, Indigenous culture, colonial history, busy ports, penguin rookeries, and so much more. 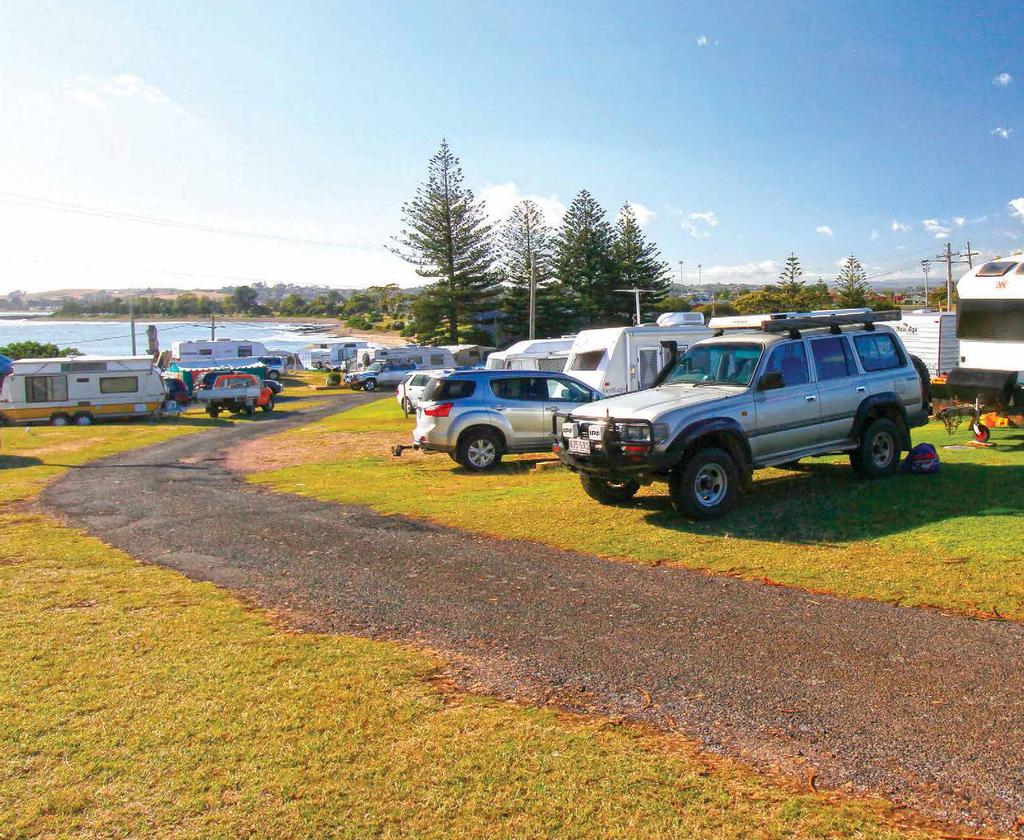 For many travellers, especially ‘vanners from the mainland, the journey to the Apple Isle begins at Port Melbourne as they board the trans-Strait ferry, Spirit of Tasmania, for the 10-hour voyage to Devonport. As well as being the ‘Gateway to the North West,’ the City of Devonport is the region’s largest port and service centre for the agricultural districts that surround it. This vibrant seaport straddles the mouth of the Mersey River, 100km north-west of Launceston.

Overlooking the western side of the approach is Mersey Bluff, a volcanic relic of the Jurassic Age (199.6-145.5 million years ago), rising on 30-metre cliffs to a lighthouse with distinctive vertical red stripes along its gleaming 16m tower. It was on this headland, in 1929, that a local teacher discovered Aboriginal rock carvings estimated to be 10,000 years old depicting abalone, crayfish, periwinkles, an emu, and a seal. These are accessed by a 1km circuit that also takes in two midden sites.

In the lee of the headland, Mersey Bluff Beach is a popular venue for locals and holidaymakers alike. Fronting a grassy precinct with excellent day-use facilities, the beach is patrolled by surf lifesavers during the summer months. The Mersey Bluff Caravan Park is located nearby, as is the Bass Strait Maritime Museum in the former Harbour Master's House. Flour Mill Bay — on the other side of the river mouth — encloses East Devonport Beach, which is a short walk from the Abel Tasman Caravan Park. Located just 800m north of the Spirit terminal, this spacious park is a handy option for catching the early morning ferry.

Heading west from Devonport, the Bass Highway passes through Ulverstone on the River Leven, and soon diverts onto Penguin Road (the old Bass Highway), which hugs the coast on a scenic route to the delightful seaside town of Penguin. Named for the little penguin rookeries that are common along this stretch of the coast, the town celebrates these diminutive seabirds with images on light poles and litter bins, and the 3.15m ‘Big Penguin’ statue in the centre of town.

Beecraft Point, at the northern end of Penguin Beach, has a boat ramp, while further west, Preservation Beach is a popular spot for swimming and has an occasional right-hand surf break in front of the surf club. Well-situated between the two, the compact Penguin Caravan Park lies adjacent to Johnsons Beach.

The bustling city of Burnie, 50km west of Devonport, is a key commercial centre and major port serving the manufacturing, forestry, and mining industries of the North West region. With a deep-water harbour on Emu Bay, Burnie is Tasmania's largest general cargo and container port, with a special facility for woodchip exports. From the 1930s, Burnie developed a large-scale industrial base and prospered on the back of a massive Associated Pulp and Paper Mills plant on the waterfront. When the plant closed in 2010, the town was forced to diversify and has since reinvented itself as a tourist destination with many first-class attractions.

Another stand-out attraction is the Burnie Regional Museum, which contains one of the largest collections of folk and cultural memorabilia in Tasmania, showcasing Burnie’s development from its agrarian roots in the 1800s to the industrial boom of the 20th century. The undoubted highlight is ‘Federation Street,’ an authentic recreation of shops and businesses common in Burnie and other North West towns in the early 1900s.

The town of Penguin takes its name from the diminutive seabirds

Just 20km west of Burnie, travellers arrive at the pleasantly relaxed town of Wynyard on the Inglis River. From the river mouth, East Wynyard Beach forms part of a particularly beautiful stretch of coastline with panoramic views across Freestone Cove towards Table Cape. Rated as ‘one of the prettiest caravan parks anywhere,’ Beach Retreat Tourist Park is nestled between the beach and the river within easy walking distance of both waterfronts and the town centre.

Wynyard is an important regional hub servicing farms on the fertile hinterland, as well as commercial fishing and sawmilling. The town offers beach activities, ocean and river fishing, waterside walks, and scenic drives through a picturesque landscape that includes the unique landmarks of Fossil Bluff and Table Cape.

Guarding the northern end of Freestone Cove is the imposing bulk of Table Cape, 5 kilometres from Wynyard. Named by Matthew Flinders in 1798, this flat-topped promontory is what remains of a lava lake that pooled in a volcanic crater about 13 million years ago. Erosion has stripped away the crater’s soft, sloping sides to expose the basalt core that now towers 170m above the sea.

Roughly circular and about 1.5km in diameter, the Cape’s plateau is covered in fertile volcanic soil and is heavily cultivated for crops and grazing. A premier attraction in spring is the Table Cape Tulip Farm, which is ablaze in colour with the flowering of some 4 million bulbs, celebrated in Wynyard’s annual Bloomin Tulip Festival. On the seaward edge of the plateau stands the heritage-listed Table Cape Lighthouse. Built in 1888, it is the only operating lighthouse open for public tours (September–April) in Tasmania.

A 10-minute drive from Wynyard brings coastal tourers to Boat Harbour Beach — possibly the most beautiful village and beach in Tasmania. More a locality than a town, this tiny ramshackle community tumbles down a steep forested hillside to a postcard-perfect beach looking out onto Bass Strait. Sheltered between rocky headlands in a north-facing cove, the crescent of powdery white sand is lapped by sapphire-blue waters of exceptional clarity — well justifying its frequent inclusion among Australia's top ten beaches.

Few businesses operate in Boat Harbour — some B&Bs, a shop with fuel and a beachside bar and cafe. The main attraction is the beach whose usually placid waters are ideal for family-friendly aquatic recreation: safe swimming in the patrolled surf, diving and snorkelling around the inshore reefs, fishing off the rocky points, kayaking, paddle-boarding, and exploring the tidal pools. Boat Harbour Beach Caravan Park has cabins and offers powered sites for small–medium vans, plus grassy space for campers.

Thirty kilometres north-west of Wynyard, Rocky Cape National Park encompasses 3000 hectares of stunning coastal scenery — ancient quartzite geology contorted into rolling hills that sweep down to a jagged coastline of windswept headlands interspersed with tranquil bays and small, secluded beaches. For such an exposed location, the park harbours an amazing diversity of vegetation — including wildflowers that produce colourful displays in spring and early summer, attracting a wonderful array of birdlife.

Rocky Cape forms part of the traditional lands of the Peerapper Aboriginal people, and several rock shelters and caves bear witness to their continuous occupation here for over 8000 years. North Cave and South Cave are two of the most significant habitation sites, containing huge midden deposits of shells, seal and fish bones, stone tools, and charcoal. Though small and only for day-use, Rocky Cape offers visitors a rich and varied experience that includes swimming, diving, fishing, boating, and beachcombing, as well as bushwalks that range from 20-minute strolls to half-day circuits and eight-hour treks.

The journey along the North West coast arrives at last at its most northerly settlement, Stanley, 125km from Devonport. Established by the Van Diemen’s Company for its headquarters in 1826, historic Stanley lies at the end of a sandy isthmus, nestled against the base of Circular Head. Known locally as ‘The Nut,’ this massive headland was formed about 13 million years ago as the core of an active volcano and later exposed by erosion to stand 152m on sheer cliffs above the surrounding ocean. This extraordinary landform can be ascended by a steep walking track or a relaxing five-minute ride on a chairlift, to a plateau with panoramic views of Bass Strait and the surrounding countryside.

The town continues its historical role as the region’s main port with live cattle and cargo shipments, and a busy fishing industry handling a wide variety of Bass Strait seafood. Sheltered in the south-eastern lee of Circular Head, the wharf facilities at Fisherman’s Dock add nautical charm to the town’s appeal as a picturesque tourist destination, as well as providing a popular venue for recreational anglers.

Visitors looking for an aquatic experience are spoiled for choice with two excellent beaches. Tatlows Beach is a long, shallow bar facing Sawyer Bay on the eastern side of the isthmus. It’s usually a low-ener›y beach but strong tidal currents sweeping along it can be hazardous. The Stanley Cabin & Tourist Park is located just behind the beachfront. Protected from strong westerly winds in a small cove to the north of the town, Godfreys Beach is better for swimming, surfing and fishing, but waves breaking at low tide can produce rips. The headland at its southern end hosts a Little Penguin rookery.

The town is a beautiful place to wander, with many fine heritage buildings and well-maintained weatherboard cottages forming a colourful streetscape sprinkled with craft shops, cafes, galleries, and boutique accommodation. A good place to start is the Stanley Discovery Museum, which houses a wealth of relics, antiques, memorabilia, photographs, and documents that narrate the town’s history.

An outstanding example of Stanley’s colonial heritage is Highfield Estate, set on a hill 2km north of the township. The elegant Regency-style homestead was completed in 1835 as the residence for Edward Curr, chairman of the Van Diemen’s Land Company. The historic precinct includes a large number of bluestone outbuildings, including a chapel, servants' quarters, barns and stables, as well as excellent views of Stanley and The Nut. The house and grounds are open for inspection by the public and on guided tours.

The Traditional Owners of North West Tasmania are the Peerapper people. We pay respects to Elders past, present, and emerging.