Just say Esperance and many familiar with the Western Australian town would conjure the eye-catching yet remarkable marriage of Australia’s most-loved symbols.

Along the coastal town’s doorstep is one of the most iconic ‘Straya sights: nonchalant kangaroos sunbathing along its snow-white beach, Lucky Bay, in Cape Le Grand National Park, epitomising how exotic and incredible the Australian wilderness can truly be — and that’s just one lucky locale.

Some 696km south-east of Perth, Esperance is one of the State’s most visually spectacular destinations. Embraced by the Southern Ocean and Recherche Archipelago, the town is surrounded by marvels, even if some of those are — in every sense — out of this world. 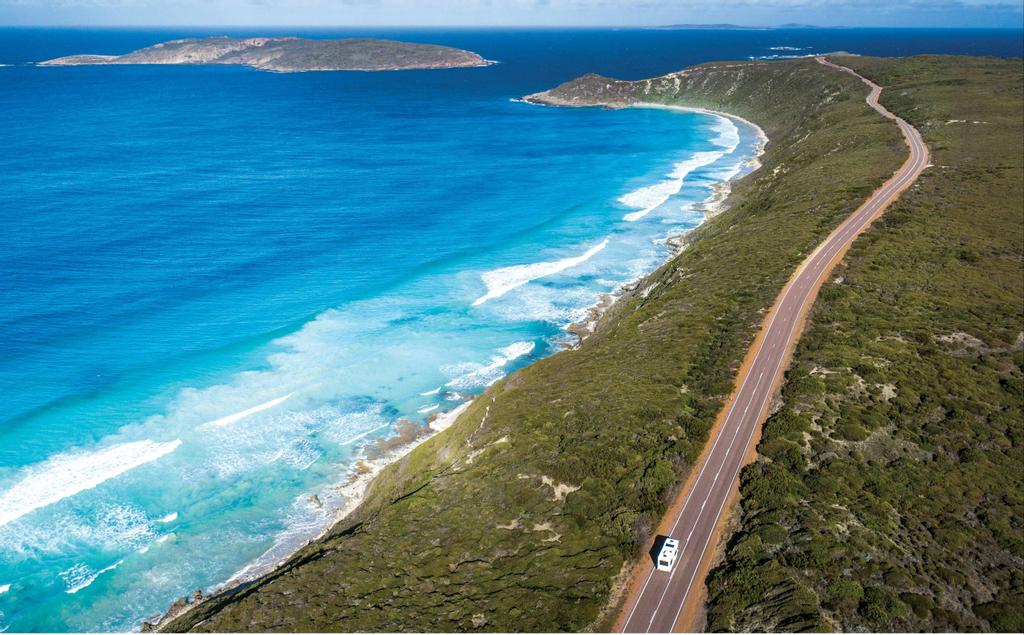 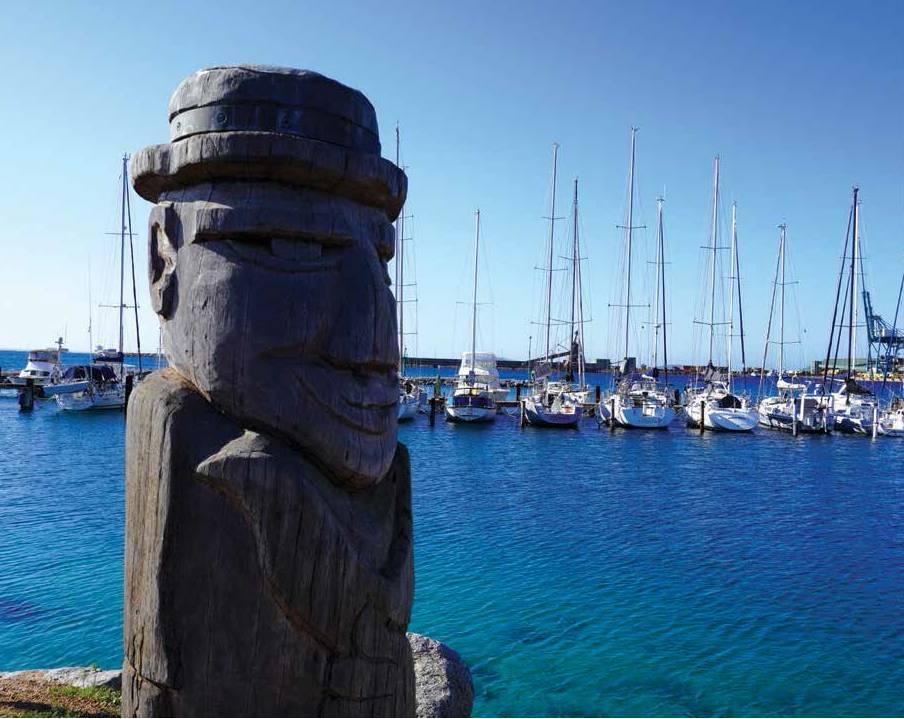 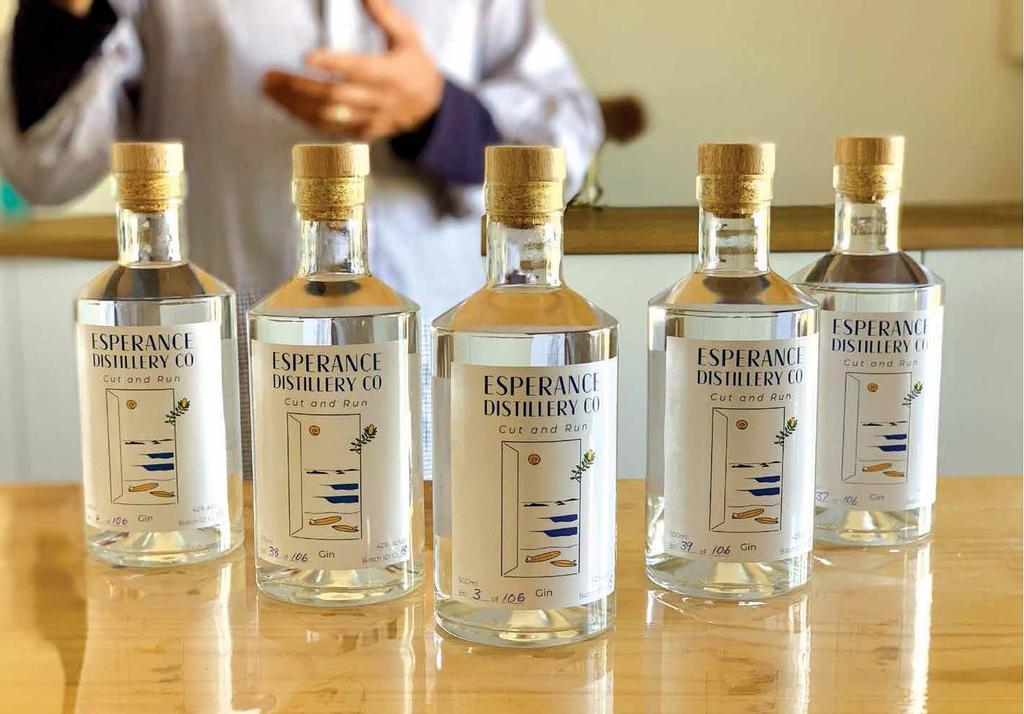 But beyond its sweeping sceneries of towering cliffs, rocky headlands, a Barbie-pink lake and its postcard-perfect turquoise beaches, Esperance still manages to impress in other ways.

DIVING INTO THE PAST

“Let’s do the whole shebang,” I cheerily told my dad as we arrived at Esperance, continuing our road-tripping adventures along the Southern Ocean coast.

Taking cues from its hard-to-miss ‘Whale Tail’ sculpture along its foreshore, I was ready to uncover the southernmost city’s past.

Over 14,000 people call this coastal hub home, and just by walking through its low-rise main streets, it was evident the town oozed country charm. But like many towns, it also had its fair share of peculiar sights.

Relics of the past, such as a 9.5m decommissioned Leopard Army tank, rest near the War Memorial. So too, does a memorial to the first wind farm featuring a giant wind turbine. And there’s a life-size replica of the prehistoric monument Stonehenge just out of town — odd.

Then there’s the Museum Park Period Village, home to an assembly of relocated 19th and 20th-century historic buildings. Strolling through the village — a stone’s throw away from the main drag — almost feels like being transported to a section of an amusement park dedicated to yesteryear, thanks to its beautifully restored facades.

But perhaps the town’s most unusual attraction is one that Esperance didn’t ask for.

Besides being home to a hodgepodge of local trinkets, Indigenous artefacts and shipwreck items, the Esperance Museum is home to one of the most famous pieces of junk.

On 12 July 1979, Esperance became part of space history when the first United States’ space station, US Skylab, crashed along the coast after spending six years orbiting Earth. The 36m space vessel’s blazing return caused debris to be scattered across the Nullarbor and Eastern Goldfields. As a result of NASA’s misfire landing, Esperance was put on the world map — cheekily, the Shire of Esperance sent a $400 litter bill to NASA, which wouldn’t be paid until 30 years later after a Californian radio station raised money from listeners to pay off the controversial debt.

But it’s Esperance who has cleaned up in more ways than one, with large fragments of Skylab, including an oxygen tank and other scorched scraps now prized pieces of history.

The gentle curves of Ocean Drive

It was time to get to see what Esperance is known for — its natural assets.

As we journeyed along Great Ocean Drive, I was my own echo chamber, with ‘wows’ free-flowing from my mouth. It’s arguably one of the country’s most scenic routes, snaking along turquoise beaches, peaceful bays, and rocky terrains in close succession.

There are 23 stops featured along the 40km scenic loop, including 10 beaches, so expect it to be a stop/start affair. There’s no such thing as beach fatigue here — it’s simply too hard to resist inviting blue hues from one stop to the next and parking up to capture it all on camera.

But supposing you had to make a short list, there are some notable highlights. Blue Haven Beach is worth the leg stretch down its steep wooden staircase to take in the view of Esperance’s towering cliff-face. Then there’s Twilight Bay, a local favourite with rounded granite boulders dotting its aqua waters reminiscent of a Zooper Dooper icy pole. Its beach also provides that same refreshing, cold hit. Snorkelling and fishing are popular activities here.

As it turns out, a full day of basking in the sun like a beach-hopping local was not meant to be. The strong sea breeze became all too consuming, and I soon swapped my bathers for a snug puffer jacket. Esperance really did take my breath away in more ways than one.

We hit the road to travel 49km east to Cape Le Grand National Park — one of the most picturesque parks in the State. Its diverse sceneries range from rugged peaks and far-reaching heathlands, all enveloped with pure white sandy beaches and turquoise waters freckled with islands.

And let’s not forget all wildlife in between, such as western grey kangaroos, pygmy possums, and a vast collection of colourful wildflowers. It really is a photographer’s dream. But of course, it’s better to walk the talk.

Rising 262m above sea level, Frenchman Peak is an extensive workout. It’s a 3km return trip to the summit and estimated to take two hours to reach the top, although it can be achieved in less time if you’re quick with the leg work. There are parts of the climb that are steep and rocky, and it is strongly advised not to go when windy. But if all the stars align, it is well worth the effort and sweat.

Free-flowing ‘wows’ flurried out of my mouth yet again, taking in the spectacular panoramic views from peak to sea from the summit’s peek-a-boo window. This photo-op delight was carved out by oceanic activity over 40-million-years ago. The popular climb forms part of a chain of peaks, including Mount Le Grand (345m) and Mississippi Hill (180m), formed over 600-million-years ago due to movements in the Earth’s crust.

Swapping sturdy footwear to thongs, we soon headed to the coast to cool off with an icon or two.

Lucky Bay is legendary for two reasons. The aptly named beach has been officially dubbed ‘Australia’s whitest beach’, and is cloaked by idyllic blue waters. Its claim to fame is backed by science, with the beaches’ powdery and squeaky sands examined by National Committee on Soil and Terrain.

With saying that, it’s no wonder why kangaroos would want to make the most of Australia’s most picturesque beach. ‘Roos are commonly spotted frolicking along the bay’s shimmering sands. It’s a novel sight and like seeing a brochure picture of Esperance come to life — no photoshop required.

Beachgoers like ourselves couldn’t get enough. The kangaroos appeared indifferent to bystanders snapping away, even hopping closer to get in on the action. Forget Rottnest Island’s quokka selfies when you can have Esperance’s beached kangaroos. Better yet, make the encounters more regular by staying at the oceanfront Lucky Bay campground for $15 per person per night.

Away from the countless photoshoots, Thistle Cove and Hellfire Bay are also must-sees and both with fine white sands. The latter is excellent for snorkelling, fishing, diving, surfing and bushwalking activities if wanting to make the most of a multi-day itinerary.

Completing the Le Grand Coastal Trail (15km one way), which connects Le Grand Beach and Rossiter Bay, is also a good way to stretch the legs and appreciate the dreamy coastline.

A TOAST TO THE TOWN

Esperance doesn’t have too many options for eating out, but the ones it does have leave a good aftertaste.

Lucky Bay Brewing is Esperance’s local craft beer mecca. The casual micro-brewery is a good day out to mingle with locals in its beer garden (or shed) while making your way through a tasting paddle. That paddle led me to make an executive decision at the bar, ordering an ice-cold pint of Skippy Rock Kölsch to linger on while enjoying the brewery’s bustling weekend vibes.

For a taste of fancy, we chose to spend our pennies at Taylor St Quarters. The historic oceanside restaurant resides in an old, refurbished hospital originally from Perth and is one of Esperance's most scenic views from a dining table. Expect it to be a bit of an indulgent affair, with modern Australian cuisine shared plates on offer. Give me a plate of succulent pan-seared prawns with nduja salami butter and plump cherry tomatoes any day.

“It’s a bit early to have gin, don’t you think?” My dad said to me as we slowly pulled into Esperance Distillery Co. He did have a point. It was 11am on a Monday morning — but we were on holiday, and soon it would be a reasonable drinking hour, right?

“I had to satisfy my gin-curiosity,” I cheekily replied.

Some of the rugged terrain at Cape le Grand National Park

These days, gin distilleries seem to be springing up like mushrooms across the State. Esperance’s latest institution, Esperance Distillery Co, is one of the newest and smallest in the country — and perhaps one of the most unique. Operated by father and son team, James and David, the distillery is renowned for using regional botanicals to infuse its gins, capturing the essence of the Esperance scenery in a bottle. How’s that for a change of scent in the air?

Their signature variety, Middle Island Pink gin, is considered one of the world’s rarest gins, instilled with Esperance Wax botanical, giving the liquid dessert a pastel pink tinge — think of it as a drinkable version of its famed pink lake, Lake Hillier. After co-owner James walked us through the handful of handcrafted gins available, it was time to have our early happy hour.

Swapping coffee beans for botanicals, we sipped our way through a handful of gin varieties, including its unintentionally gimmicky pink drop. With each sip, I felt the warmth and fuzziness overtake me.

Perhaps this would be Esperance’s next celebrated icon, and I am all for it.

The Traditional Owners of the Esperance region are the Ngadju people who have lived in the area for over 50,000 years. We wish to pay respects to Elders past, present and emerging.

Take a scenic flight to see the stunning pink hue of Lake Hillier with HeliSpirit or Fly Esperance Scenic Flights.

Or visit Woody Island, the sole island out of 105 islands and 1200 rocky outcrops in the Recherche Archipelago to boast woodlands.