Paddle Along the Murray's Past

Sandy Guy — 25 October 2021
Towns along the Murray River showcase some interesting glimpses into South Australia's past, from historical figures to transportation to pubs

Legend has it, Harry ‘The Breaker’ Morant rode his horse into the bar of the Renmark Hotel.

Established in 1897, the hotel sits grandly near the banks of the Murray River in the South Australian town known as a ‘Gateway to the Flinders Ranges.’ Bush poet, drover, daring horseman, Boer War soldier and convicted war criminal, ‘The Breaker’ — born Edwin Murrant in Somerset, England, in 1864 — is just one of the characters entwined in the stories that abound across regional South Australia.

In the hotel where Morant once whetted his thirst, today you can dine on a balcony overlooking the Murray River, where a paddleboat awaits passengers for a cruise along the river that runs through this handsome town of wide streets and vast riverbank parklands. 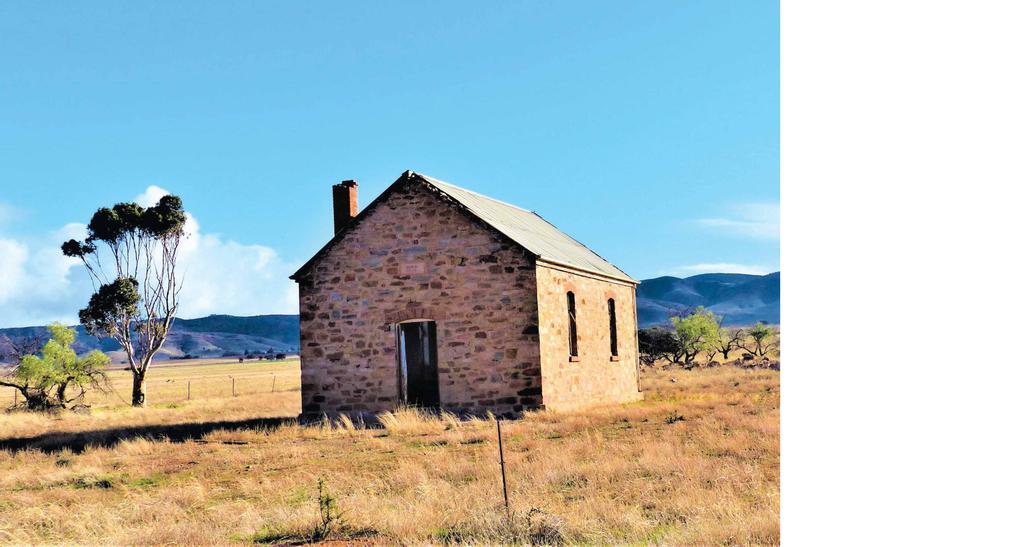 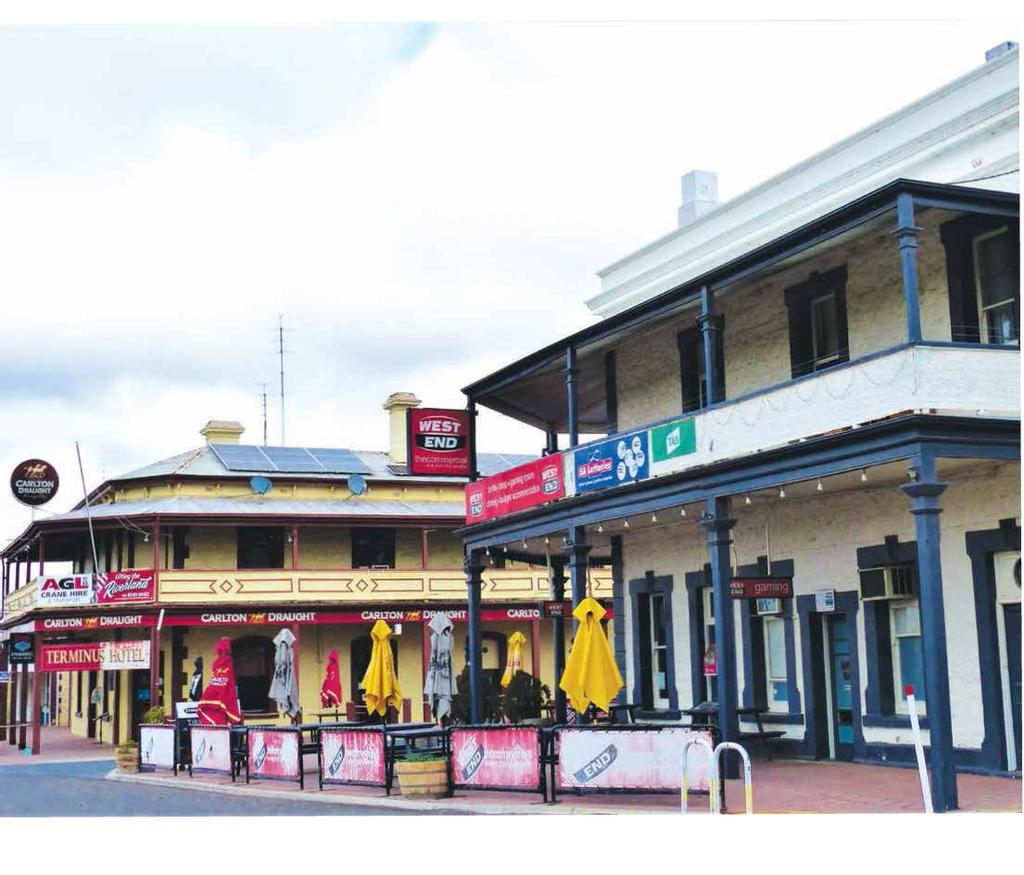 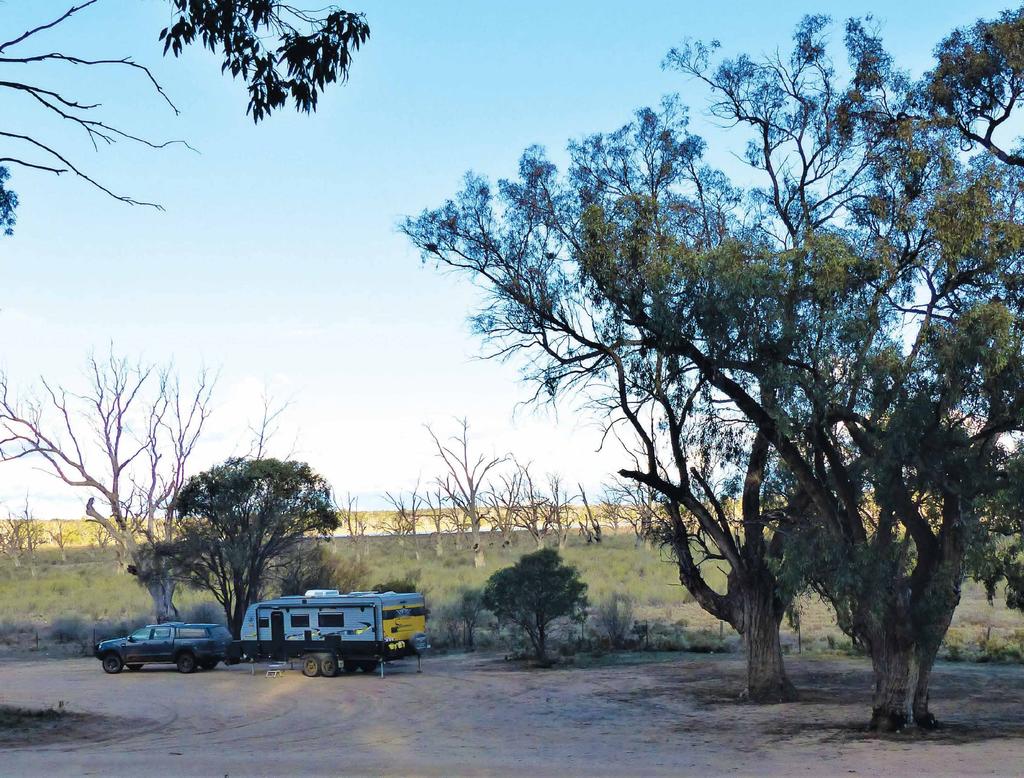 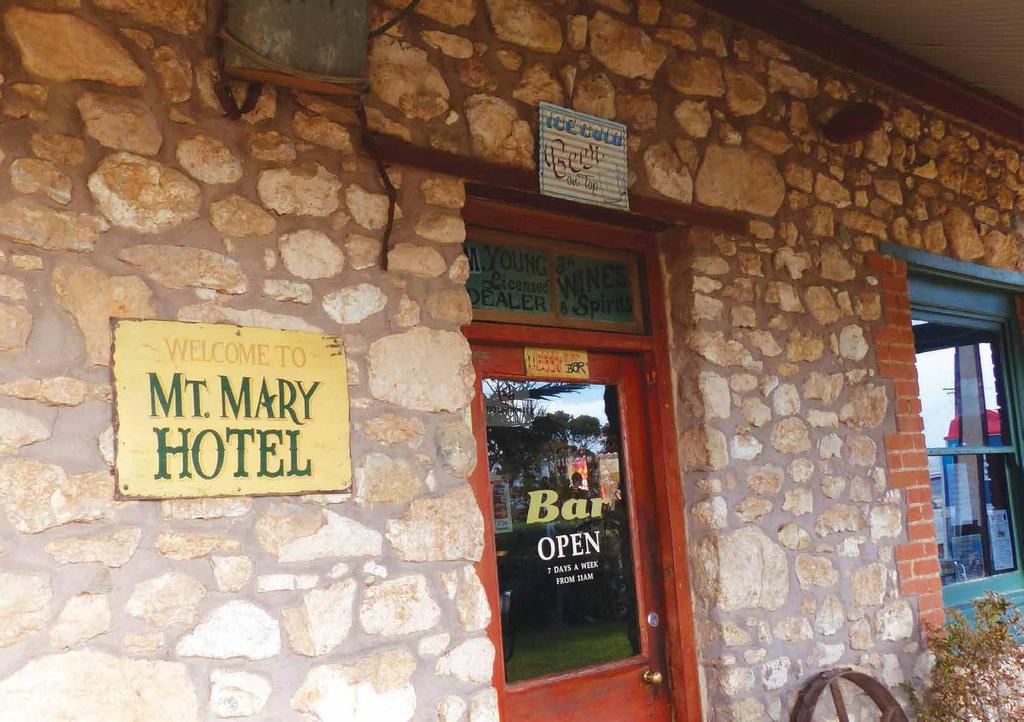 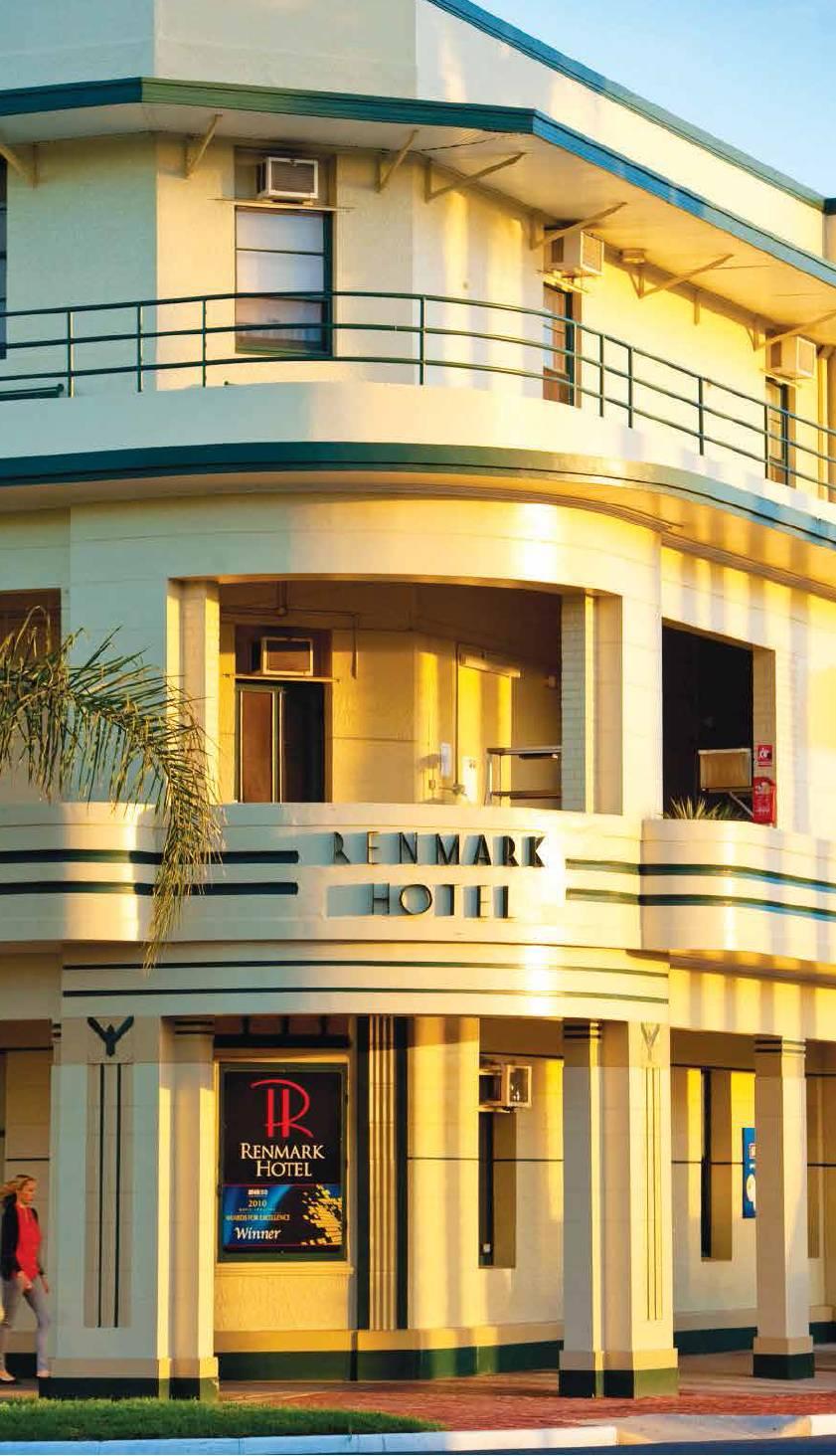 Renmark lies 256km north-east of Adelaide, and is one of the major service centres on the Murray. From the 1860s to the early 1900s, the Murray was like an inland highway, a hive of activity with the splash of some 240 paddle-steamers transporting cargo and passengers from major ports such as Goolwa, SA, at the mouth of the Murray, to Albury, NSW, almost 1000km away — as high up the 2508km-long Murray River the steamers ever traded.

During the halcyon paddleboat years, river towns along the way such as Echuca, Mildura, Wentworth and Morgan became vital ports.

The once-thriving port town of Morgan is 112km west of Renmark via the Sturt and Goyder Highways. Along the way is Overland Corner, 47km west of Renmark, once one of many outposts where paddle-steamers paused as they plied the Murray.

The Overland Corner Hotel, built from fossilised limestone in 1859, has plenty of yarns of its own — it’s said that in 1879 bushranger Captain Moonlight (aka Andrew George Scott) and his gang, on the run from police, locked the local constable in a cell, took off on horseback, and retired to the hotel for a beer, still astride their horses.

At the cosy bar where Moonlight purportedly downed a beer, the hotel’s owner Brad Flowers tells me of his family’s journey from inner-city living to Overland Corner, population 32.

In December 2020 Brad, his wife Nicole and their two young children set off from Sydney on what was to be a two-year caravanning odyssey around Australia. Five weeks after their departure, COVID-19 hit, so they bought a pub instead.

Today, bands often play in the hotel’s shady beer garden, and patrons dine on the likes of Wa›yu beef schnitzel, Teriyaki salmon, and burgers that bring locals from far and wide.

From Overland Corner, it’s 67km to Morgan, a gem of a riverside town that was once Australia’s busiest inland port.

From the 1880s until around 1910, Morgan’s 168m-long redgum wharf bustled with paddleboat activity, as did the nearby Morgan Railway Station, with six trains a day hissing to a stop at the platform.

Free camping site near the Murray River on Overland Corner

This small town is an ideal place to pause, stroll along the river, see the remains of the wharf, visit the Morgan Railway Museum at the old railway buildings, and Morgan Living History Museum at the nearby Landseer Building.

Once a shipping agents warehouse, the imposing Landseer Building offers a glimpse of the romance of paddle-steamer days, as well as an interesting collection of horse-drawn wagons, an old farmhouse kitchen, and telephone exchange.

Morgan has two hotels, situated opposite each other in prime positions overlooking the river. We learn that The Terminus, established in 1879, was originally popular with paddleboat captains and local landowners, while the similarly-aged Commercial was a favourite with workers.

“Apparently the two groups drank only at one of the two pubs, situated just metres apart, so there would be no fights when they all went to church on Sunday,” said Bill Weaver, a volunteer at the Morgan Living History Museum.

At Morgan we leave the mighty Murray, which from here turns south for its final 315km journey to the sea, while we head north-west towards the Southern Flinders Ranges.

Originally called Krichauff after a German settler, the railway arrived here in 1878. The town’s name was changed to Beatty post-WWI, when most German names were wiped off the map, then to Mount Mary in 1940.

There’s not much left of the settlement, which once sat on the trainline between Riverland and Adelaide and was a hub for sending wool and charcoal to service Murray River paddle steamers, bar the stone-built Mount Mary Hotel, established in 1894, a scattering of houses and a few old shops.

Mount Mary lies beyond what’s known as ‘Goyder’s Line of Rainfall’, a delineation between arable and arid lands. Goyder’s Line, which runs roughly east-west across central South Australia, is named for Surveyor-General George Goyder who, after inspecting northern pastoral lands devastated by drought in 1864-65, advised the colonial government to discourage farmers from planting crops to the north of the line, where annual rainfall is usually too low to support cropping.

These days, inside the bar of the rustic Mount Mary Hotel, owners Donna and Shane Craig serve spectacular seafood platters piled with fresh lobster, scallops, prawns, fish and squid, along with other pub favourites such as lamb shanks and mash.

“Mount Mary might be remote, but the stars are incredible out here,” said Donna as she cuddles an orphaned joey she cares for called Jack. “And so is the history of pioneers settling in a very tough environment.”

Other Mount Mary attractions include the Mount Mary Lawnmower Races, held in June, which attracts more than one-thousand people to town.

Following the Thiele Highway and the old train line through Bower — another town that time forgot — it’s 27km south-west to Eudunda, known by locals as the ‘Valley of the Hidden Treasurers.’

Just west of town are freshwater springs called Eudundacowi by the Ngadjuri people, where stock being overlanded from Adelaide to Queensland during the late 1800s were watered. The town, dating from 1870, was named for this site.

Featuring a parade of historic buildings, Eudunda is delightfully un-touristy and full of charm. Around town are a few classic garages dating from the early days of motoring, the long-closed Laucke flour mill, shops with wide verandas, and two hotels — the Eudunda Hotel and the Light Hotel.

Brochures, available from the Eudunda Family Heritage Gallery list 47 places of interest around town to explore, including the Colin Thiele Drive. Author of more than 100 books including Storm Boy, Thiele was born in Eudunda in 1920. A bronze statue of the author takes pride of place at the town’s lovely Centenary Gardens.

From Eudunda, we turn on to the Worlds End Highway and the 67km drive to the old copper-mining town of Burra. Along the way, driving across flat plains are some interesting sights, including the stone Lutheran church with a gilded golden tower, and hotel fondly referred to as the ‘Pointy Pub,’ at the tiny town of Point Pass.

Further north is Robertstown, population 151, which was bustling agricultural hub in the 1950s, with a railway, saddlery, two garages and a blacksmith — all now long gone.

Still in town though is Lehmann’s General Store, where Merv Lehmann has been serving customers since he started working for the store’s previous owner Reg Roberts — for whom the town was named — 72 years ago, when he was barely 16 years old.

Now 88, Merv, also a farmer — his great-grandfather purchased farmland in Robertstown in 1881 — bought the iconic store with its original timber shelving and counters in 1976, which he runs today with his daughter, Cheryl.

Originally called Emuville when it was first settled by Europeans in the 1860s, Robertstown is also home to the Robertstown Hotel (the Robbie Pub) where you can dine on traditional pub fare (roasts on Sundays) and partake in the ‘Last beer before world’s end.’

Worlds End, 27km north of Robertstown, was once an active little place, with a post office, hotel, two churches, cricket and tennis teams, and a school where up to 70 students were enrolled in the earlier years of the last century.

But this dot on the map was declared to cease to exist in December 1962. Like many parts of South Australia’s sparsely-populated mid-north region, you can see stone ruins from the settlement.

A few kilometres north, standing alone in a paddock, is the stone-built Worlds End Wesleyan Methodist church, built in 1899 and closed in 1944.

Burra, 16km north of Worlds End, boasts one of Australia’s best-preserved 19th century streetscapes, and is unmissable for those with an interest in Australia’s early European history and colonial architecture.

Founded in 1845 with the discovery of copper near the Burra Burra Creek, by 1851, Burra had grown to become Australia’s largest inland settlement with a population of about 5,000 people.

Until 1877 the town, set amid grassy hills 156km north of Adelaide, was the hub of a huge copper boom, home to one of the world’s largest copper mines — some 90 per cent of South Australia’s copper was mined here.

The Burra Burra Mine, known as the ‘Monster Mine,’ contributed significantly to South Australia’s early prosperity before Burra evolved into a service centre for agriculture and, later, popular destination for visitors.

Renmark Hotel is a popular stop off, Image

A Burra Heritage Passport (adults $30, $25 concession) is available at the Burra and Goyder Visitor Information Centre at 2 Market Square, as is the Discovering Historic Burra book, which details 46 historic sites over an 11km driving trail.

The circa 1856 Redruth Goal played a major role in the multi-award-winning film, Breaker Morant, starring Edward Woodward as ‘The Breaker,’ along with Bryan Brown, Lewis-Fitz-Gerald, Jack Thompson, John Waters, and the late Charles ‘Bud’ Tin›well, filmed in and around Burra in 1979.

Exploring Burra, you can recognise several landmarks used in the film that was the toast of the 1980 Cannes Film Festival, including the town square and rotunda, Heathmont Estate and historic Bon Accord Mine Complex.

The Traditional Owners of this area of South Australia are the Ngadjuri People and the Ngarrindjeri People. We pay respects to Elders past, present and emerging.

Big4 Renmark Riverfront Holiday Park has powered sites from $57 per night. Situated on 1km of river frontage. All the mod cons of an upmarket park including resort pool, water park, outdoor movie theatre — you name it.

Eudunda Caravan Park has powered sites from $25 per double. A new amenities block is shared with the Eudunda swimming pool. Free (unpowered) camping available at oval adjacent to caravan park.

The Burra Caravan and Camping Park has powered sites from $30. Located in the heart of town on the banks of the Burra Creek. Amenities include camp kitchen with TV.

Burra Showgrounds has powered sites for $20 per night. Situated in Burra North, a short walk to eateries and tourist sights. There are 23 powered sites, a shower, male and female toilets, and dump point.

Renmark’s Plush’s Bend free camp area is a short drive from the town centre and has designated sites for self-contained vehicles. The TM Price Rotary RV Park, 6km south of Renmark, has five sites for fully-self-contained RVs and caravans.