A Day in the Misty Mountains

Chris Whitelaw — 6 May 2021
The natural beauty of this region makes it clear why it is one of Australia's heritage-listed treasures.

During a mid-year journey to Mission Beach, we tackled a day trip to the nearby Atherton Tablelands, which the locals dub 'The Misty Mountains'. Fronting the Coral Sea at about 17 degrees south, Mission Beach basks in a tropical-monsoon climate that delivers around 3000mm of rainfall each year — 25km inland, Tully gets about 4500mm. The tropical heat characteristic of the coastal plain is tempered by the tableland’s altitude, which cools the humidity to clouds that often shroud the escarpment, hence, the ‘misty’ sobriquet.

Fringed by coconut palms, the narrow coastal plain slopes up to a rugged mountain range of volcanic origin, deeply incised by gorges, scoured by fast-flowing rivers and plunging waterfalls. These mountains are blanketed by dense rainforests that form part of the Wet Tropics, a 9000sqkm World Heritage Area that stretches 450km between Townsville and Cooktown. 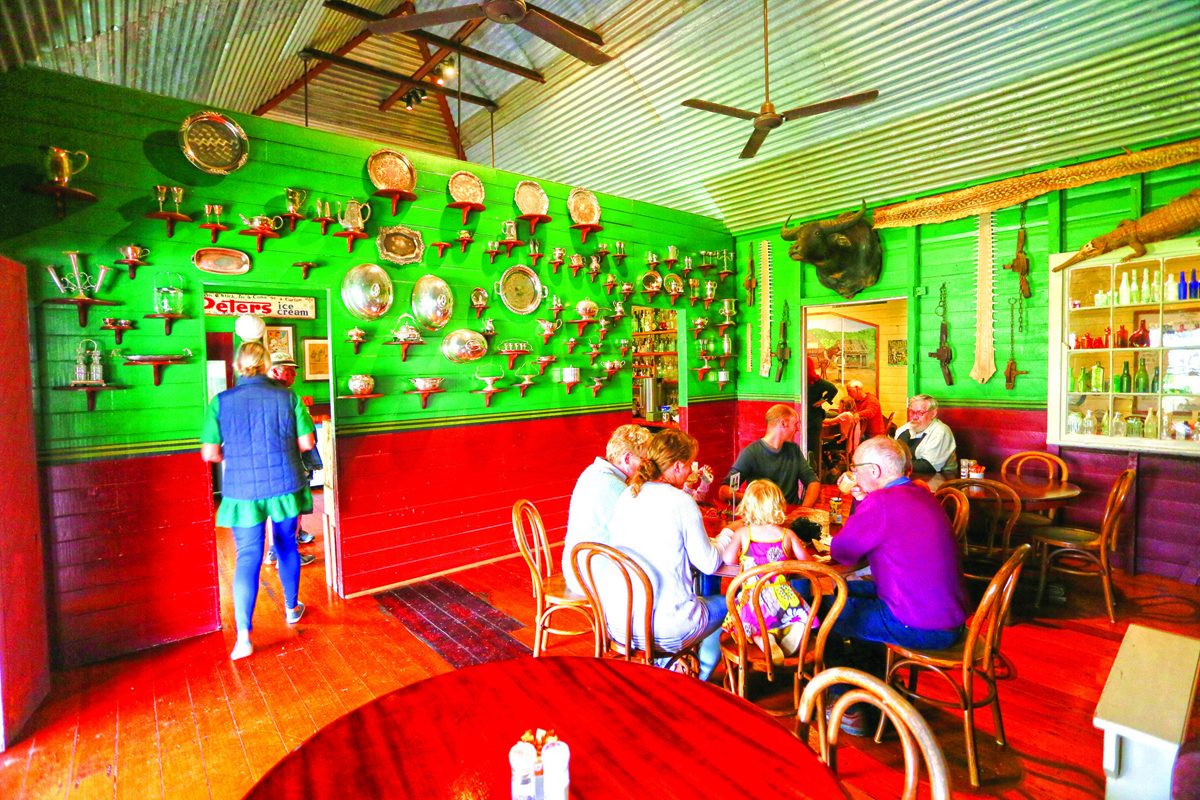 Originating more than 200 million years ago when Australia was part of the Gondwana supercontinent, these are the oldest continuously surviving rainforests on Earth. Although comprising less than 0.2 per cent of Australia’s land mass, they conserve an astonishingly rich biodiversity — over 3000 plant species, 107 kinds of mammals, 368 bird species, 165 reptiles and amphibians, and 60 per cent of Australia’s butterfly species. The largest and most remarkable denizen of the region’s forests is the Southern Cassowary, which lends its name to the regional council; one of the most beautiful is the Ulysses butterfly, also known as the ‘Mountain Blue’ for its electric blue wings that span up to 130mm.

As it happened, the day of our adventure was showery, with the distant mountains looking very misty indeed. Undeterred, we set off north from Mission Beach, leaving the Bruce Highway at Silkwood to join The Canecutter Way.

Dubbed the ‘Greatest Detour in the North’, this scenic drive through the hinterlands between Kurrimine Beach and Innisfail is named in honour of the original sugar growers and their teams of cane cutters, who pioneered the industry that flourishes on these red soil plains.

Along its length, the Way is dotted with small towns that reflect the region’s history and provide essential services to residents and travellers.

Silkwood takes its name from a local timber with a silky lustre, valued for furniture making. It was founded by soldier settlers in the 1920s who established tropical fruit orchards and dairy farms. Significant Italian immigration in the 1940s introduced a heritage reflected in the annual Feast of the Three Saints, celebrated on the first Sunday in May.

The town of Mena Creek straddles the eponymous watercourse, a tributary of the South Johnstone River. One of the town’s notable attractions is heritage-listed Paronella Park, a five-hectare environmental reserve developed by Spanish immigrant Jose Paronella in the early 1930s as a Moorish-inspired ‘pleasure garden’.

We crossed the South Johnstone River at a large sugar mill that was constructed in 1911 and connected by a tramway to the Mourilyan Wharf for shipping raw sugar to market. The river and its North Johnstone sibling rise in the Atherton Tablelands and flow more than 200km to their confluence near Innisfail, where a record flood reached 8m in 1913.

At Wangan, we left the Canecutter Way to join the Palmerston Highway, which links Innisfail with the town of Millaa Millaa on the tableland, rising to 1050m as it crosses the escarpment. Its name honours bushman Christie Palmerston who, in 1882, blazed a track over the present route in just 12 days. The highway traverses the southern section of Wooroonooran National Park, which encompasses lofty ranges that include Queensland’s two highest peaks, Mount Bartle Frere (1622m) and Bellenden Ker (1561m).

Upon clearing the ‘cloud forests’ in the lee of the range, at Junction Road we turned towards Mungalli Falls — Queensland’s only world heritage-listed waterfall on private property. Comprised of three plunging tiers, the main fall plummets 80m into a narrow gorge with a spectacular view of the forested mountains beyond. A track descends steeply to the bottom of the falls and a glow worm colony in a dell near the plunge pool.

The tableland’s temperate climate and abundant rainfall support a dairy industry covering some 25,000 hectares of rolling farmland. One of the stand-out producers is the Mungalli Creek Dairy near Mungalli Falls. Since 1987, this family-owned enterprise has applied ‘biodynamics’ (an ultra-organic form of agriculture) to its production which has earned an A-grade certification by the Biodynamic Research Institute. Its products have also won more than 140 industry awards and many of these excellent wares are available from the on-site Farmhouse Cafe and cheesery.

Further west along the Palmerston Highway we diverted again onto Theresa Creek Road to begin the 17km waterfalls Circuit connecting three impressive, and very different, waterfalls. The first was Ellinjaa Falls, a picturesque 15m cascade to a pool that is a known habitat for turtles and platypus. Three kilometres further on, Zillie Waterfall is taller, louder, and sometimes shrouded in spray created by the roaring torrent crashing onto the rocks below.

The third in the trio is Millaa Millaa Falls. This icon of the Atherton Tableland has featured in numerous movies and advertisements for products as diverse as beer and herbal shampoo. The falls are about 18m high, where Teresa Creek flows over a wall of volcanic basalt into a large pool fringed by lush rainforest. They were discovered by Europeans during the exploration of overland routes from the coast, and later used by overlanders traversing the Palmerston track and workers constructing the railway line between Malanda and the Millaa Millaa township in the 1920s.

A few kilometres from the falls, amid lush farmland, lies Millaa Millaa, the ‘Village in the Mist’. This delightful town’s dairy and timber history is presented at the Eacham Historical Museum and along a short walk that connects the Lions Park picnic area and tropical garden, St Patrick's Creek and a wide main street bedecked with flowering trees and shrubs.

West of Millaa Millaa, the Palmerston Highway joins the Kennedy Highway (National Highway 1) at the village of East Evelyn. Heading north, the Kennedy Highway and Longlands Gap Road undulate through verdant meadows, skirting the Herberton Range as it rises to more than 1200m on its way to the historic town of Herberton. Promoted as ‘The Village in the Hills’, Herberton is set on a ridge at 918m in the Great Dividing Range.

The town is notably drier and cooler than the Wet Tropics, and this change of climate was evident after Millaa Millaa as we cleared the misty rainforests and entered an open, sun-warmed landscape dappled by scattering clouds.

In 1880, a party of prospectors led by Willie Jack and John Newell discovered payable quantities of tin ore in the area and established a settlement to exploit it, deciding to name it Herberton for its location in the headwaters of the Herbert River. The Great Northern Mine operated from 1880 to 1956, yielding spectacular profits. At its peak in the early 1900s, Herberton was the richest tin mining field in Australia with a population of 8000 and two newspapers, a school of arts, a hospital, 17 pubs, and a brewery. After the mine closed, the site was inscribed on the Queensland Heritage Register and, in 2005, the impressive Herberton Mining Museum and Visitor Information Centre was opened.

The town's most significant tourist attraction, however, is the Herberton Historic Village. Spread across 6.5ha, the Village is reputedly the largest collection of Australiana in Queensland, with more than 50 restored buildings reconfigured as a 19th century mining town.

Each building is a museum in its own right, including an old school, a coach and livery stable, a miner's hut, a slab hut dating from 1870, a bank, a presbytery, a telephone exchange and a pub, which houses the Bakerville Tearooms — be prepared to set aside a whole day to see it all.

Heading south from Herberton, Tumoulin Road provides a scenic alternative to the Kennedy Highway as it meanders through a patchwork of broadacre meadows flanked by the Millstream River and Tumoulin Forest Reserve. The Reserve’s granite hills are forested by tall stands of rose gum, stringybark and messmate, providing vital habitats for vulnerable species like the yellow-bellied glider, magnificent broodfrog, and rufous owl.

Tumoulin Road emerges at Ravenshoe which, at 930m, is Queensland’s highest town. Historically, Ravenshoe’s main industry was timber, but this came to an end in 1988 when the inscription of the Wet Tropics WHA claimed most of the surrounding forests. Since then the town has been primarily a service centre for the district’s beef and dairy farming and a tourist destination.

It also makes a significant contribution to the ‘green economy’ through the nearby Windy Hill Wind Farm, Queensland’s first wind farm when it began operations in 2000. Each of its 20 turbines can generate 12 megawatts, collectively powering 3500 homes and reducing carbon emissions by up to 25,000 tonnes per year. The impressive array of 44m turbine towers can be seen from a viewing area next to the highway with information panels.

At 30km south-west of Ravenshoe we pulled into our last stop for the day, the Innot Springs Leisure and Health Park, next to the highway on Nettle Creek. Discovered by John Atherton in the early 1870s, the springs’ therapeutic qualities were not commercially exploited until the late 1890s when Charles Spranklin developed spa facilities and accommodation at the site. Mules hauled the water over the Cardwell Range to Townsville, where it was bottled at Spranklin’s Innot Cordial Factory and shipped to Europe as a health tonic.

The hot springs bubble into Nettle Creek at around 80 degrees, which is seriously hot and potentially dangerous for bathing. Care needs to be taken when finding a spot to dabble in the creek – or you can ‘take the waters’ at the adjacent Health Park, where seven spas and pools offer various safe temperatures. After wallowing in them at your leisure, further refreshment can be taken at the nearby Innot Springs Hotel. Adjacent to the natural springs, the Innot Springs Caravan Park provides both powered and unpowered sites for caravans and camping with basic facilities.

At sunset, we began the return trip to Mission Beach. Crossing the Wet Tropics range in the deepening gloom, a heavy mist descended, fogging the headlights and congealing on the windscreen back to the coastal side of the escarpment. Back on the Bruce Highway, we turned for home and made good time getting there — 12 hours and 385km door to door makes for an excellent day in the Misty Mountains.