John Ford — 14 January 2021
The country around this central Queensland town has so much on offer it deserves a place on any must-see list.

Tourism is an essential ingredient in the economy of the outback, so local governments do their best to pump up interest in their towns, with some spending vast amounts on stopover facilities that encourage an extra night's stay. Such investment should be encouraged and appreciated by caravanners because it can make a big difference to our travel experience.

But, while government action is to be lauded, one woman has established her own world class tourist attraction on the dusty roads around Aramac.

Milynda Rogers had fostered an interest in art since her days as a student at a school where painting and clay sculpturing were the preferred mediums. But when she saw the stunning metalwork eagle statue in Blackall installed by South Coast NSW artist, Richard Moffat, things clicked into place, and she was inspired. 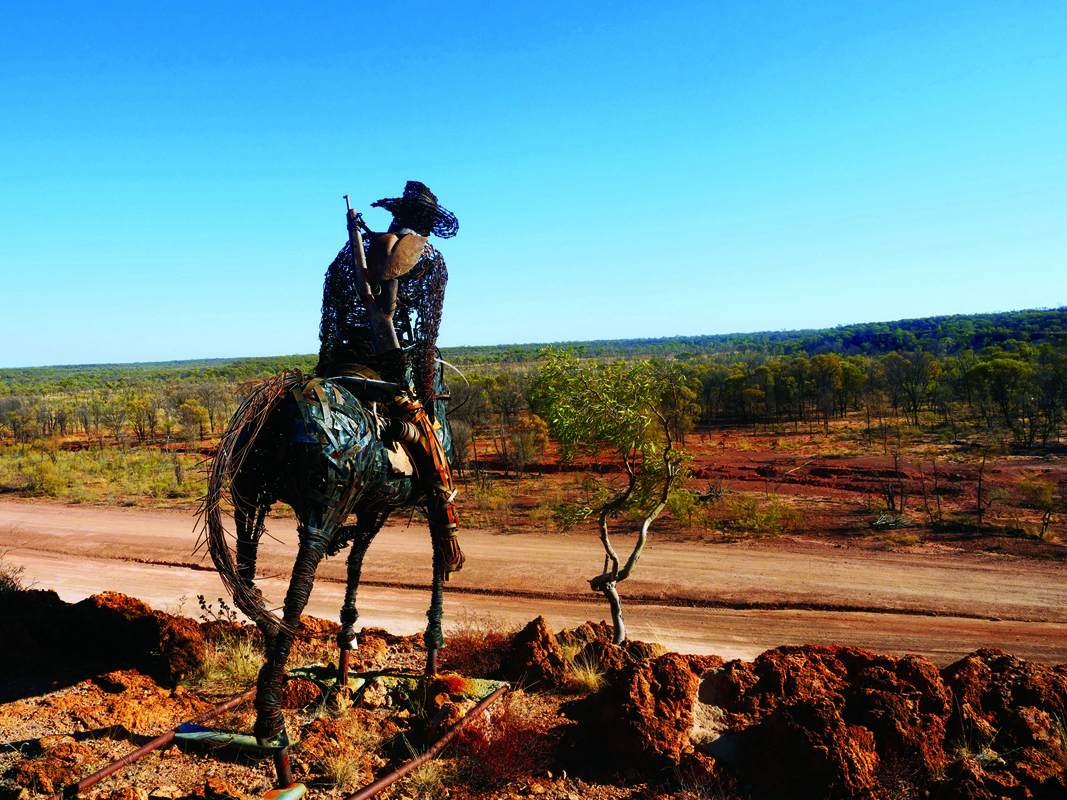 With material found around the farm, a barbed-wire ball took shape, and Milynda recalls she decided if she could make a ball, she could make other things too.

With advice from her husband Darryl and friends, a MIG Welder was set up in the farm workshop and hours were spent watching YouTube learning to weld. Raw material was found scouring farm rubbish tips for discarded metal, especially rusty barbed wire that had been weathered to a dull sheen.

Milynda's first effort was a striking 3m metal bottle tree on the side of the road outside the Boongoondoo property where the family was living. At the time, it was a bit of fun for her children and their friends who would see it on the bus run to school.

The bottle tree was fashioned from old oil drums covered in spiralling wire with discarded cattle tags for leaves. It was to become the start of what has become the Lake Dunn Sculpture Trail — the largest outdoor art installation in the country and possibly the world. It is home to over 40 sights, spread around a 205km triangle of mainly dusty roads.

Following the bottle tree, a new homestead sign was crafted with two large, yellow-crested white cockatoos checking the sparse traffic. More small sculptures followed, and soon people were talking about the zany artworks, and Milynda was encouraged to keep going.

As her reputation grew, Milynda adapted the name the Scrap Metal Sheila to connect the elements of her medium and the image of an Australian woman from the bush as tough and enduring. Success followed and she now has her own studio and the life of an in-demand artist, skilled welder and incurable scavenger.

According to Milynda, her grandmother instilled a love of recycling, and it has grown into a fascination of all things metal and the way motor parts and old tools can be melted and reshaped.

We stumbled across the Lake Dunn Sculpture trail on our way to Aramac — we had a family connection to the town and thought it might be a good side-track on our way to Longreach. But it wasn't until we settled into the Aramac hotel for tea that we were told the Sculpture Trail was more than the few artworks we had seen on our quick look around.

The next day we hit the road early to track down the rest of the trail and check out Lake Dunn. Because the path is spread over such a long distance, you need a full day to explore, and there's plenty of varied outback scenery between the 40 works. Some aren't that easy to find which is part of the fun, so you need to be on the lookout. Happily, a guide map is readily available from various stores to help.

The artworks vary from small and secretive (where's Wally), zany and mysterious, right through to emotionally challenging. The returned soldier on his horse at sunset at Grey Rock brought a tear to my eye, and Jonathan Thurston kicking a grand final goal is by itself worth the trip.

This statue came about when a lad in the district challenged Milynda to make the tribute in the hope their idol might visit. So far that hasn't happened, but it would be an incredible sight when the two Jonathan Thurstons finally meet. In the meantime, the lifelike figure waits patiently on the Mitchell grass plain. It’s so close to reality it even sports an angel wing tattoo and the player's signature mouth guard.

When we met, Milynda was working on a commission of a life-size horse and jockey for the Aramac Turf club and took time to explain the way a design and finished project takes shape.

By looking at various shapes and objects, Milynda can imagine where on a final piece they might fit and takes inspiration from there to the finished item. For more formal commissioned work, initial drawings give the basic shape before a frame is welded together and the finer details are assembled. Some of the larger pieces can take several months to complete.

These days Milynda works out of her Iron Pearl Gallery, named after her grandmother, at the family property just out of Barcaldine. When we asked which was her favourite of the works on the trail, I wasn't surprised to learn the tall Jabirus on the hill in the swaying golden grass is top of her list.

A LOT OF BULL

Because the trail evolved over a decade, you can see Milynda's style and skill develop with each work. The latest piece is a large white bull in memory of the local legend around Captain Starlight and his ill-fated attempt at cattle rustling in the late 1800s. The bull started as a white car wreck but has taken on many body parts that create a lifelike monster pawing the ground as cars approach. It might be the most imposing and imaginative of the lot, with motorcycle and washing machine parts and a steely shock absorber attesting to his virility.

You can learn how to become a Scrapmetalsheila (or Scrapmetalbloke) at workshops held from time to time around the country. Work is also progressing on some instructional videos, and you can find more information at scrapmetalsheila.com.au.

Gray Rock is a historical site on the Jericho-Aramac Road not far from the Return Soldier sculpture. In the days of the Cobb and Co horse and coach, Gray Rock was a stopover point between Aramac and Clermont where travellers rested at the Wayside Pub.

By 1886, when the railway had reached Barcaldine, the coach service was withdrawn, and the pub fell into disrepair. These days there's no sign of the hotel, but travellers over the years have carved their names in the sandstone overhang.

Nearby Horsetailer's Gorge had a narrow entrance that was closed off to keep horses safe and stop them from straying overnight. Both places are well signposted on the Jericho-Aramac road, and the gorge drive offers splendid views of this natural feature.

THE ANCIENT ART OF TURRABURRA

In contrast to the modern sculpture trail, the road is also home to an ancient wall of artwork that dates back thousands of years. Situated in sandstone country on the old Gracevale Station near Gray Rock, the vast gallery had been privately held for the last century and a half. Although these art sites have been well known locally, traditional Indigenous groups and academics interested in studying the history had little access and only minimal efforts were made to protect these irreplaceable treasures from grazing cattle.

But following years of severe droughts, the property became available. In 2019, nearly 9000ha of the old Gracevale Station was bought by the Indigenous Land and Sea Corporation and returned to the local Iningai community. The holding has been renamed Turraburra, in memory of the clan of original inhabitants killed in the nearby Mailman's Gorge massacre in 1865.

Suzanne Thompson, managing director of the Yumbangku Aboriginal Cultural Heritage and Tourism Development Corporation- YACHATDAC, told us the property holds one of the most important traditional art sites in the country.

Work over the last year has regenerated the land and reduced cattle numbers, and the Corporation has set up visitor facilities including a well-equipped camping area.

In the escarpment of the surrounding countryside, vertical faces of rock shelter walls show thousands of paintings and petroglyphs in an area nearly 200m long. Depicted in the images and etchings are ancient megafauna and plants, as well as emu symbols and the traditional songlines of the Milky Way and the Seven Sisters. Paintings include hand stencils and, like other sites across Queensland, there are several six-toed human footprints, thought to represent ancestors with special powers.

The story of the Seven Sisters is an integral part of Indigenous Mythology right around Australia, connecting the star cluster of Pleiades with the morning star. This is a story passed down through millennia and is alive today through the stories of the guides when you visit.

YACHATDAC aims to offer a unique tourism experience that they describe as ‘Guesting on Country’. Visitors will be provided hands-on insights into the local culture and the ancient history and practices of the traditional people of this land. The level of contact with the culture and these art sites of world significance is a welcome opportunity for tourists to the region to cherish for years to come.

Turraburra is open to the public by appointment through their office at 6 Beech St Barcaldine or by visiting the website at yachatdac.com.au

Lake Dunn is 68km outside of Aramac, and the locals simply call it the lake. The Sculpture Trail takes its name from this broad waterway, and with camping and basic cabins and a caravan park right on the shore it's an ideal place to settle in and explore.

Even though water levels were low when we visited, the lake enticed us in for a swim. Locals bring ski boats in warmer weather, and I noticed some kayakers off in the distance.

Up to 80 species of birds visit the lake, and authorities stock the waters with Yellowbelly and Black Bream, so bring a rod.

You can enjoy picnic facilities, and the shire recently completed a new toilet block. For cabin and caravan park bookings call (07) 4651 0565.

The Eastmere Road to Lake Dunn is the only tarred section of the Sculpture Trail, so if you aren't keen on dirt roads or conditions are poor, there's still plenty to see on this section of the Trail.

One intriguing stopping point is the Healing Circle, accessible by a short drive on private property at White Station near the Rainbow Serpent installation.

The 7m diameter stone circle is a short walk up a low hill offering views of the plains below. The ring is said to be connected by a spiritual pathway to six similar circles in Tibet, the US, Turkey, Japan, Madagascar and Peru, and was built by the American based Foundation of Heaven organization.