A Drive Through Time

Scott Heiman — 2 April 2020
Across the top of Australia, this road is not just a way to get somewhere, it's a destination in and of itself

If I mentioned explorers Abel Tasman and Matthew Flinders, which part of Australia would you assume I was talking about? Perhaps you’d think of Tasmania or the stretch of south-eastern Australia traced by the Great Ocean Road.

But what if I told you that William Landsborough and Edmund Kennedy also passed this way? And Burke and Wills too. By now you may know enough to lift your gaze further north on the map.

We’re actually talking about the Gulf of Carpentaria, which featured in these explorer’s stories between 1644 and 1866. At one time or another, each one of them surveyed the area, whether from sea or land. 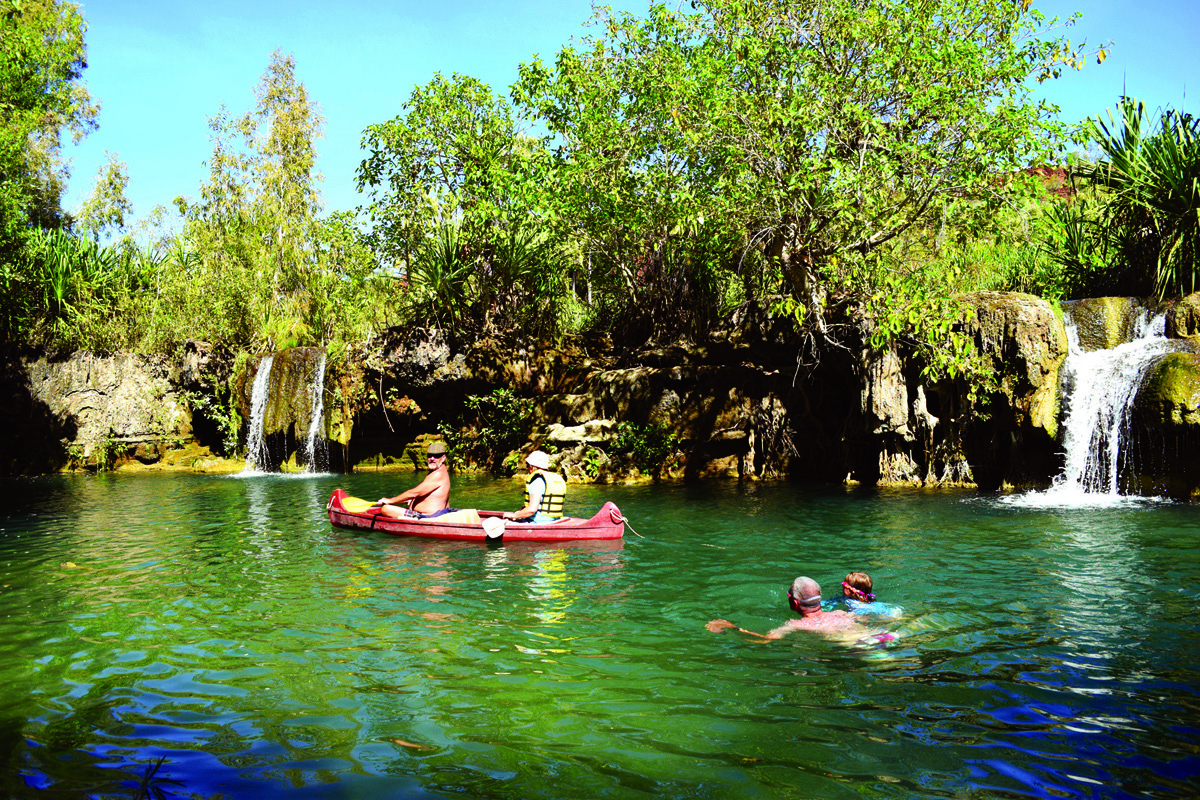 For the modern overlander, the Savannah Way crosses this part of the country (and more), traversing over 1100km between Cairns and the Northern Territory border. Beyond this, it continues all the way to Broome another 2600km away. Indeed, the Savannah Way forms part of Highway 1 which circumnavigates the entire country over a distance of some 15,000km.

For those travelling from the west, you may use the Savannah Way on your way to the Tip. For others, it’s part of the Big Lap, and or for others still it’s the gateway to Arnhem Land. Wherever you’re headed, there are lots of reasons to add the Savannah Way to your travel plans — it’s even a travel destination in its own right.

Known as Australia’s Adventure Drive, the Savannah Way is steeped in history — and it’s not just the history of early European explorers and pioneers, nor the 30–60,000 years of Aboriginal occupation. The geological timeline that’s still on show here, extends back to 189,000-year-old lava tubes and fossils up to 25 million years old.

Travelling from east to west, the Savannah Way takes in the Atherton Tablelands. Known today for its rich productive soil, this region has deep roots within the Indigenous community, a history of tin mining from the late 19th century and a strong military connection to the World War II. Here Australian and American troops conducted training before taking the fight to the Japanese in New Guinea, the Solomon Islands and beyond. Even today, it pays to be careful where you drive-in your awning pegs — there are still areas of ground that hide unexploded ordinance (bombs, grenades etc) that are a legacy of the period. Some of these even contain mustard, and we’re not talking about a hot dog condiment!

Further west, you’ll find the turn-off to Undara Volcanic National Park. Undara is an Aboriginal word meaning ‘long way’, in reference to the unusually long system of lava tubes that are located within the park. It’s the longest system of its type in Australia and indeed one of the longest in the world.

The tubes themselves were created by flowing lava which crusted-over on contact with the air. Inside the tubes, the lava remained hot and continued to flow before ultimately draining-out downstream leaving hollow tunnels. Over time, sections of the roof collapsed, creating more than 50 caves containing specialised ecosystems that are recognised internationally. Well known to Europeans since the late 1800s, stone tools have been found around the cave complex showing the area’s long association with local Aboriginals.

While it’s now a national park, the location of the caves was privately owned by a pastoralist family from 1862 to the late 1980s. At that time, the park was established but the family was allowed to retain some of the pastoral area and to develop an eco-tourism industry to promote and protect the unique ecology and geology of the cave system. As a result, the only access to the tubes is via the Undara Experience, a commercial venture which runs two-hour tours from March to September. The visitor complex includes a privately-run campground — the only camping available in the Park. While basic, it’s a convenient location to explore the area. It’s also just a short walk to the compound’s main lodge which serves meals and is appealingly centred around several re-conditioned turn-of-the-century Queensland Railway carriages utilised as dining rooms and accommodation.

Moving on, you’ll reach the towns of Normanton and Karumba. The Normanton Visitor Information Centre has a display of photos and artefacts from the region and useful local information. It’s housed in an impressive historic building on the corner of the town’s main road and just a stone’s throw from the 8.63m statue of Krys the Crocodile. When we drove through town the first time, this statue was imposing enough to induce a scream from our littlest crew member. The statue is reputed to be an exact replica of the largest saltwater crocodile shot by ‘One Shot Krys’, a 30-year-old Polish immigrant who escaped post-War Europe to set up a new life here in Aus.

The nearby coastal village of Karumba is a great location to fish for a giant barra. By the dock, there are plenty of daily fishing charters to choose from, and a visit to the local Barramundi Discovery Centre, which is also a barramundi hatchery, will give you plenty of inspiration. Another option is to hop on a sunset cruise to learn about the local history and industry. Floating along the mangrove-lined waterway of the Norman River, you’re bound to get an eyeful of wildlife — there are crocs, crabs and Jabiru everywhere. Or settle back at the Sunset Tavern to watch the sunset. Better still, stay longer and do it all.

When you’re researching for this trip, you’ll see references to the Burke Developmental Rd, Burketown and the Burke and Wills Access Road, 35km west of Normanton. These references acknowledge the efforts of the ill-fated Victorian Exploring Expedition, led by Robert Burke and William Wills, which attempted to cross the continent from south to north. You can visit the site of the party’s northern-most camp which was known by the explorers as Camp B/CXIX (number 119).

On 13 February 1861, Burke and Wills left John King and Charlie Gray (two lesser known chaps on the same expedition) to mind this camp for three days. Meanwhile, the duo pushed further north in an attempt to reach the Gulf Coast but they were impeded by mangroves and boggy terrain. While Burke and Wills were away, King and Gray blazed 15 trees to record the camp’s location and the scars are still visible today. While the Dig Tree at Cooper Creek is better known, this site is well worth visiting, with interpretative signs that tell stories of Australia’s pioneering history.

The Burke and Wills tale is full of hardships and starvation and underscores how ill-prepared these explorers were — they simply didn’t know how to effectively live off the land. By contrast, Ludwig Leichhardt, a German explorer who travelled through this area sixteen years earlier, existed solely on bush tucker gathered by Aboriginal expedition members. Indeed, ancient adaptations made by Indigenous hunter gatherers are still evident at Sweers Island (136km from Karumba in the Gulf) which holds one of the largest traditional stone-walled intertidal fish-traps.

Around Camp 119, you’ll need to ask yourself ‘which way next?’ The Village People appealed to adventurous spirits to ‘go West’ and if you follow their lead, you’ll reach Leichhardt Falls, 77km from Burketown and located along the Leichhardt River. While this is technically a plunge waterfall, don’t be tempted to take a dip because saltwater crocodiles inhabit the river that feeds the falls. For the best views, visit at the beginning of the Dry Season when the river is still full. There’s a popular free camping site by the river.

An alternative is to detour south down the Wills Developmental Rd to take in Boodjamulla National Park and the World-Heritage listed Riversleigh Fossil Fields — we reckon you’d be crazy not to.

Boodjamulla National Park is a spectacular part of the world with breathtaking walks from 30 minutes to four hours in length and with varying grades of difficulty. Look closely among the rocks on the Island Stack Walk to find fossilised plant life from the ancient shores of a sandy beach.

While the ocean subsided 530 million years ago, you can still (safely) swim at Lawn Hill — in a spectacular gorge so magical, our young daughter calls it ‘Mermaid Lagoon’. The same lagoon hosts myriad fish that aren’t scared of humans, so there’s plenty of opportunity to see them — queue the ‘oohs’ and ‘aahs’ and squeal of delight among adults and kids alike.

While Lawn Hill is a tranquil place today, its European history is somewhat sinister. In the 1880s, friction between white settlers and local inhabitants reached its zenith with an atrocious massacre of Aboriginal people that even involved decapitation and trophy-taking by pioneers. As you take in this site’s beauty today, it pays to reflect on this little-known event which exposes some of the untold costs of settlement.

There are several places to call home while you’re around here. Lawn Hill has its own campground, and there’s also the 82-acre Adels Grove Camping Park, which is a beautiful place. Many of us who’ve stayed there were dismayed to hear the ground’s main building and restaurant were extensively damaged by fire in July 2019. But they are a tough and resilient people in the bush and the Adels Grove rebuild is well underway. The campsite and services are fully functional and a temporary restaurant with bar services is in place. Unlike nearby national park sites, Adels Grove is pet friendly.

Fifty kilometres from Lawn Hill are the Riversleigh Fossil fields. Here you’ll see the fossilised remains of long-distinct animals. From more than 250 fossil-rich sites at Riversleigh, hundreds of species have been described from thousands of well-preserved specimens. These include the Ekaltadeta, a kangaroo that ate meat, and Obdurodon dicksoni, a Platypus with teeth! But wait there’s more, such as the Mekosuchus, a goanna-like crocodile that climbed trees, plus other crocs that would have made Krys look like a baby. Particularly impressive is the 26-million-year-old duck relative Dromornis murrayi which scientists lovingly call ‘Big Big Big Bird’. Why? It could grow to 250 kilograms and stand two metres tall. These, and other mega-fauna, died out around 50,000 years ago during the same period that the first Aboriginals arrived in Australia, which is probably no coincidence as these giants would have made for a great meal.

The whole area is World Heritage listed on account of its outstanding natural values. Only some of the site is accessible to the public but that’s enough to give you a strong impression of its overall significance. When the sun goes down, you can stay at the nearby Miyumba camping area. It’s small but convenient, as it’s only four kilometres from Riversleigh.

The Savannah Way shows the richness and diversity of our history, culture and biodiversity. We truly are a lucky bunch, spoilt for choice with so many options. The horizons seem to stretch endlessly ahead, tempting us to travel even further — just watch out for the raptors up here munching on the roadkill. While the mega-fauna may have died out 50,000 years ago, the Gulf Country supports a population of wedge-tailed eagles with a two-metre wingspan, the largest in Australia. That’s a ‘Big, Big, Big Bird’ in my books.