Oh no. If you read last issue’s report on the impressive Coromal Pioneer Evolution XC 632S, or PEX for short, you may recall that van suffered a brake caliper failure that rendered it unable to complete AL-KO’s Best Aussie Vans 2018. It seems trouble runs in twos for Coromal as the Element Evolution 632 (RTV) seen here had a stub axle fail and also left the event on a flatbed truck.

So it really was heartbreaking for Coromal’s national marketing manager Simon Kerr, who had put in some serious leg work to get two vans from WA to Echuca Moama, when we also found trouble inside the RTV.

Unfortunately a few things that would normally be picked up, and rectified, in pre-delivery inspections were missed, most likely due to the short time frame Simon and the Apollo team were working to. We found a few sticky drawers and cupboards that wouldn’t open, and some wiring that was, in our view, far from ideal. Add in some wood shavings, and what was a real contender to take an award, was unfortunately left behind by the competition. 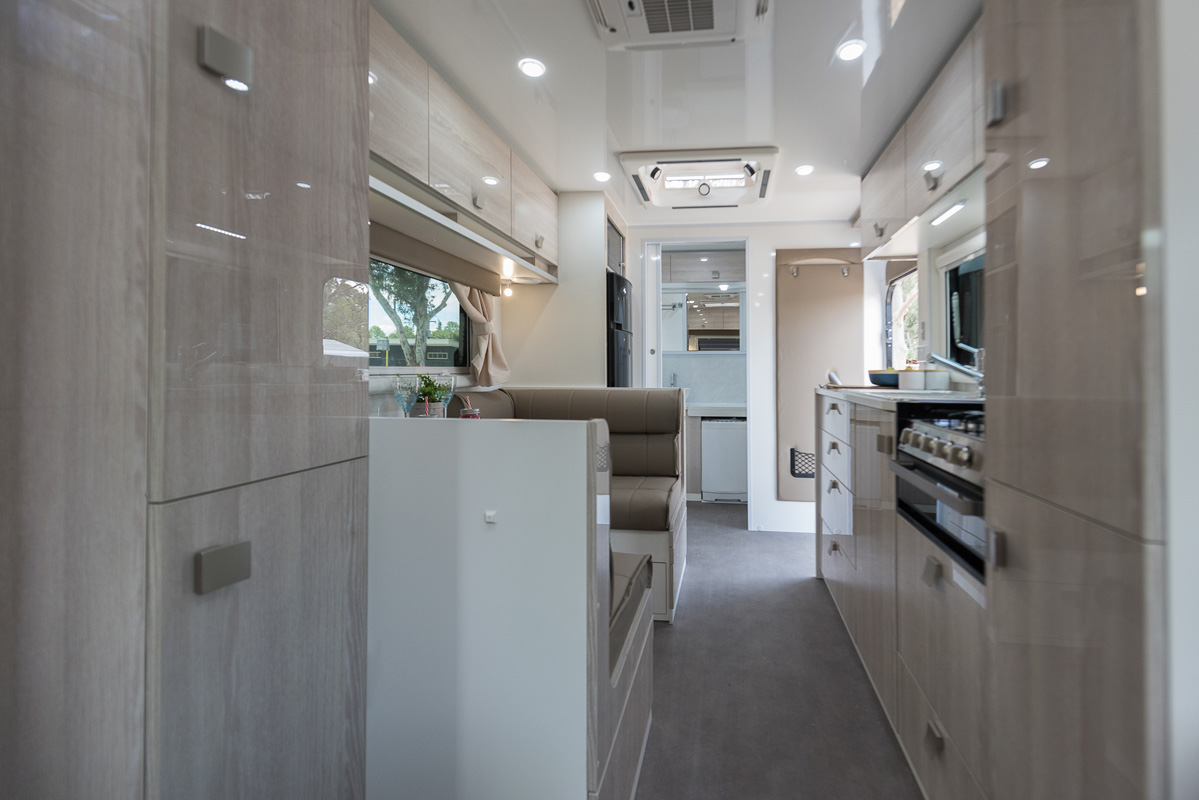 It was a shame as the technology behind the build is state-of-the-art. Like the PEX, the RTV’s body features composite one-piece sides and roof with a thick, hard-wearing polypropylene, honeycomb floor. Couple this with the lightweight FRV chassis and some modern graphics, and the recipe looks good.

Speaking of good looks, the layout is exceptional with good space and great appliances, which literally shone thanks

Now that Apollo owns the Coromal name (and Windsor too) and is taking manufacture to Queensland, hopefully the quality will improve to reflect the excellent innovation, design and looks the RTV showed at the 2018 event.

The noticeable differences are that the RTV has a leatherette cafe dinette as opposed to genuine leather, a three-way rather than compressor fridge, more timber than weight-saving honeycomb in the cabinetry, and vinyl wrap rather than carbon fibre lower external wall panelling.

Additionally, the RTV rides on an Ezy Tow RTV fully independent leaf spring setup whereas the Pioneer boasts a double wishbone suspension with eight airbags (two per wheel). It also has electric drum instead of ventilated disc brakes.

This road tourer, with light-duty offroad capabilities has a high degree of self-sufficiency, meaning you’ll be in your ‘element’ (if you’ll excuse the pun) while out in the woop woops. It carries a 100Ah lithium battery, 300W of solar, as well as ample water capacities — 2x80L (fresh) and 1x110L (grey).

Internally, the piece de resistance is a spacious ensuite, with roomy shower to boot. I also liked the mood lighting and soft-close drawers, while a recessed washing machine with slide-out cover is a sensible utilisation of space.

But on the flip side, some sections of cabinetry were stiff — a couple of slide-out drawers and a full-height cabinet were jammed shut.

Creature comforts wise, the RTV has all the basic requirements on hand to maintain a comfortable travelling life. Factor in the Future Teck™ construction, use of honeycomb furniture components and integrated engineering and, in a skin-deep sense at least, the RTV commands the majesty of a higher-end caravan.

The first Coromal presented was the Pioneer 632S XC (PEX). I was pleased by many aspects of the presentation, including the internal and external design, features and accessories. I was also impressed by its innovative chassis, drawbar and frame, as well as the not so obvious construction technique.

But I couldn’t help but question the use of the, what I believe is unique, wishbone and shock absorbed airbag combination suspension. By all means it appeared strong enough with well specified torsion arms and a seemingly extensive support structure with sensible pivot points and electrical wiring. But I had to ask Coromal’s representative, Simon Kerr, about the effect of this unusual suspension on the side motion forces on the stub axle, with regard to side loading and variable angles on the wheel camber. I suggested that the system may produce undue force on all of the tracking, and eventually the bearing and brake componentry which generally causes friction, heat and excessive tyre wear.

Simon couldn’t answer my questions and, although he made all attempts to get a suitable set of answers from his engineers, unfortunately none were forthcoming during the event.

A couple of days later we were presented with the PEX’s mid-priced stablemate, the Coromal RTV. Its layout and many of its features reflected the good design and componentry of its pricier sibling, and it utilised the same innovative chassis, but without the final coating protection.

But there were several concerns about the RTV’s finish quality, such as cabinets and drawers that wouldn’t even open. My experience allows me to look past minor hinge and latch adjustments but it was starting to ring alarm bells.

I then opened a cupboard near the bed and was dismayed to find exposed electrical componentry — undoubtedly a potential fire risk, or at the very least a hazard for an electric shock.

I then progressed to the undersides and again was dismayed by the engineering of the suspension, supposedly rated at 2885kg ATM. I never actually measured the wishbone-style construction material but it appeared to be minimal, and the only surface treatment was paint. The supporting cross sections appeared too light and the locksert-style connections and cross braces seemed inadequate. The manufacturing of the pivot points on the swing arms seemed under-engineered, a short falling which could, in my opinion, lead to reduced traction and increased tyre wear.

I was particularly concerned by the minimal amount of steel surrounding the through-bolt pivots on the swing arms, and the moving parts didn’t appear to have any supporting bushing to eliminate wear. I have to still ask: how much obtuse load does the wishbone-style suspension with its varying angles on the stub axles throw onto the hubs and bearing assembly? And what about tyre wear with varying camber? Why not just stay with conventional time-proven suspension that works? It would be loads cheaper to produce, especially for this highway tourer.

There were also wiring issues with electric brake cables slung directly to moving parts and crunch points, some above, others below the leaf springs. This creates a real risk of rubbing through and potentially shorting out through the chassis, with the obvious implications of brake failure. It could even short out the towing vehicle, with implications for the modern computer modules, etc.

Editor's Note: Due to the stub axle failure, John ‘Bear’ Willis missed driving the RTV. The score shown is an average from the other three judges.

There’s a considerable amount of jargon used with Coromal’s new Element Evolution RTV van. Words like Future Teck™, FRV and ABS. Quite simply what they mean is a fairly radical departure from Coromal’s previous methods of caravan construction.

The Evolution RTV is designed as road tourer/light off-duty van, that is, something designed for well-graded gravel roads. Even so, Coromal has used the same body construction in the RTV as for its offroad caravans. Called Future Teck™ construction, it’s a frameless design that uses seamless one-piece fibreglass composite sheets for the 30mm walls and 55mm roof. Purpose-designed aluminium extrusions hold the body components together.

Included in the new bodywork are the automotive glass windows. Somewhat more scratch resistant than the acrylic equivalent, they look good as well.

Underneath the van, the honeycomb-structured one-piece 40mm polypropylene floor is designed to mesh in with the FRV chassis. In case you are wondering, FRV stands for Fleetwood Recreational Vehicles, but it’s the actual chassis that is important.

One noticeable feature about the hot-dipped galvanised chassis is that there are no welds to be seen; it’s all bolted and riveted together in a modular assembly.

In addition, punched-hole C section is used for all the components, which enhances strength and reduces weight, all in the same package.

Coromal has always designed its own suspension systems and that has continued with its new range of caravan. Upgraded Ezy Tow™ independent leaf spring-based suspension is fitted to the RTV.

It’s not all new gear, though. Between the front rails, the conventional 80L water tanks have galvanised sheet protection.

Internal cabinetry has had a makeover, too, with the emphasis on the weight/strength ratio.

All the CNC-cut overhead lockers and cupboards use an aluminium framing system and are an integral part of the overall structure. New lightweight doors are included in the cupboard and overhead locker design.

Overall, the step away from conventional caravan manufacturing techniques aims to keep the body strength up and the weight down, while at the same time retaining all the features and appliances that are desirable in a contemporary caravan.

The Coromal Element RTV was a study in contrasts, for me. At $73,795, it’s the cheaper option in its category and it impressed with much of the same high-level R&D and innovation that Coromal showed in its big brother, the PEX. However, a lack of attention to detail as the van came out of the factory — we can only assume — did let it down in a few areas. But we’ll get to that.

Like the Excalibur Prince, the Element RTV is not designed to be a full-offroader. That said, it’s likely to take you to basically all the places that most caravanners actually travel to. So that won’t be a limiting factor.

It has impressive levels of all the essential fixtures and fittings such as power, solar and water, for its price and status, including a lithium battery which is almost unheard of at this price point.

It gets most of the eye-catching kit from the PEX as well, including a smaller rear foil spoiler (again, mostly for looks!), the same style of chassis and the same super-modern style. It misses out on items such as the lightweight gas cylinders but that’s because, as a rough-roader rather than an offroader, weight is less of an issue.

What sets the RTV apart from the PEX, though, is its fit and finish, which was at a completely different — and lower — level.

There were at least four interior cupboards and drawers in our van on test that could not be opened, another two or three that were littered with wood shavings, and even more with edges that had never even seen a sander. These aren’t major issues and could be easily remedied before pick-up but they’re also not what we expect in a $70K-plus van that’s been judged one of the best in Australia!

Reassuringly, several members of our judging panel have seen other RTV’s both before and after AL-KO Best Aussie Vans and found none of the same issues on those models.